As has been the norm during his eight months spell at Hearts of Oak, Kenichi Yatsuhashi took to social media to fully disclose full details of his departure with the Phobians.

The Japanese American used the social media tool minutes after his departure was made official corroborating the reasons the Phobians had earlier stated.

“My fantastic time in Ghana with Accra Hearts of Oak in Ghana Premier League has come to the end as of today, Monday 20th of June 2016 16:30 at Hearts secretariat where I met with the management.”

“At the time of signing my contract in 1st week of November 2015, I told the managing director at that time that I have a prior commitment in July 2016 that I can't change the date. At that time, GPL was scheduled to start by December 2015 and we assumed that the league must be over by July 2016 or at least very close to end of the season. So, he said "We will deal with it when the time comes.”

“As you know, start of GPL got delayed from December 2015 to end of February 2016; therefore, end of the season got delayed to end of September 2016. So, I approached the board about the 25 days/five matches I will miss.”

“My 1st option was to let my two assistant coaches care take while I am away. If that is not acceptable by the board and the management, then we must terminate my contract to replace me by someone else.”

“The board and the management decided to terminate the contract now, and I signed the letter of termination of the contract by mutual consent.”

“What my prior commitment is in July 2016 is something I will not discuss publicly. I asked Hearts management not to reveal it and they agreed.”
The Japanese American who had developed a good rapport with the fans was quick to pay glowing tributes to the Phobian supporters.

“I have had great memories with Accra Hearts of Oak for good time and for difficult time.”

"I thank our supporters for their criticism in the beginning; that made me push harder to do better. I also thank them for unbelievable amount of support after 1st league match; without their support, I would not have accomplished what I had accomplished today.”

He did not hide his feelings about leaving as well.

“It is bitter that I have to leave now.”

“I thank our players for making unbelievable efforts they had made and teamwork they had shown. We achieved many successes because of their efforts and teamwork on and off the pitch.” 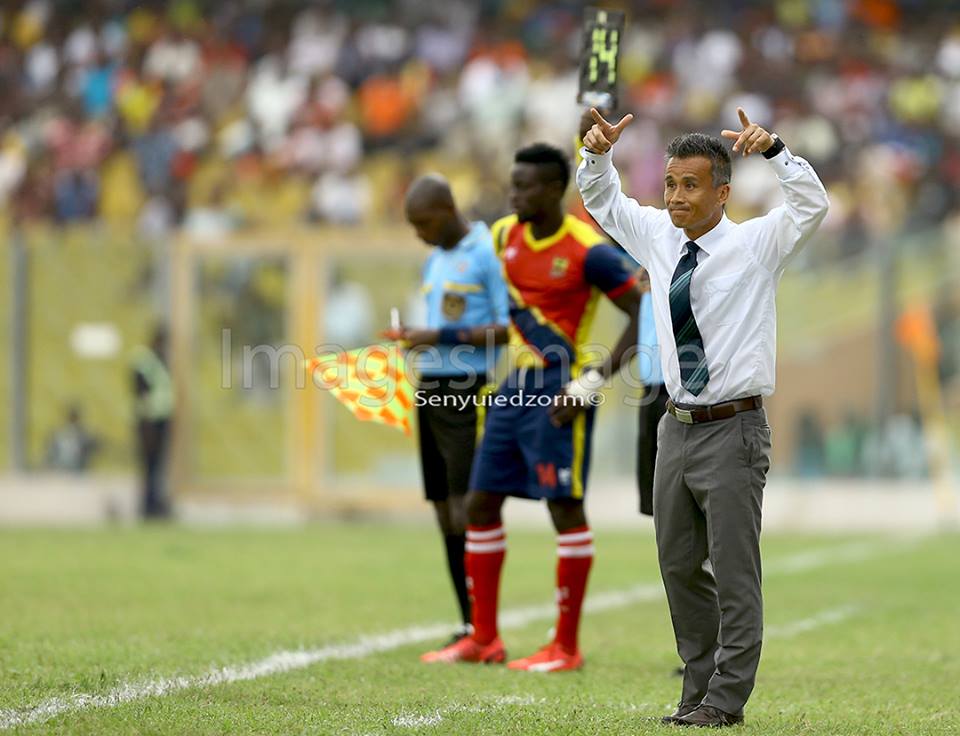 Kenichi, during his time in charge, fought for all and sundry in the team and most especially his assistants, Nassam Yakubu and Yaw Preko, both of whom he had words of praise for.

“I thank my two assistant coaches, Nassam Yakubu and Yaw Preko. We three were perfect, and it was an excellent working relationship we had together. I am sure I will work with them again.”

“I thank for our staff for coping with my demands.”

“I thank the club for the opportunity.”

His final lines were demonstrated a crestfallen coach who was bent of winning the Phobians their first league title in seven years.

“It is bitter that I must leave now in midway to the season. It is disappointing to find myself in this situation, and I don't think we can point any single person out for what has happened today.”

“For sure, time I was with Hearts of Oak this year was my best time in my coaching career so far.”

Kenichi leaves Hearts of Oak two points behind leaders Wa All Stars and still unbeaten away from home.