Ketasco's Francisca Lamini scores another straight As in WASSCE - MyJoyOnline.com

Ketasco’s Francisca Lamini scores another straight As in WASSCE 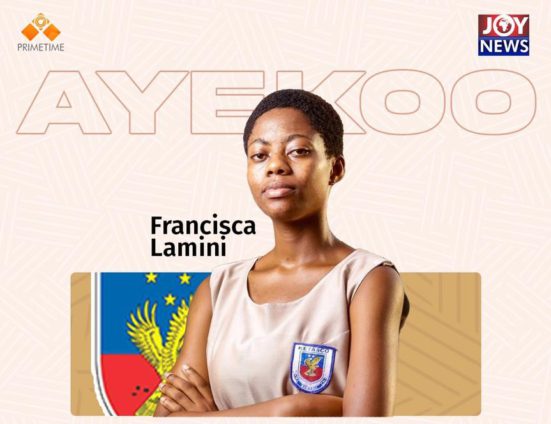 National Science and Maths Quiz (NSMQ) poster girl, Francisca Lamini has continued to exhibit impressive prowess even outside the contest.

Though her school did not win the ultimate prize, she received praise after being the only female in the grand finale of the popular quiz show in the last eight years.

During her exploits on the programme, it came to light that the prodigy from the Keta Senior High Technical School had already scored straight As in the private Nov/Dec WAEC examinations.

This was back in SHS 2 when she sat for the test.

However, she has repeated the feat in the just-ended West African Secondary School Certificate Examination (WASSCE) as the results were released on December 8.

The science student passed the 2021 edition with distinction as she scored As in all the core and elective subjects.

Francisca Lamini was also named the Most Outstanding Student at the 2021 NSMQ where Prempeh College emerged victors.