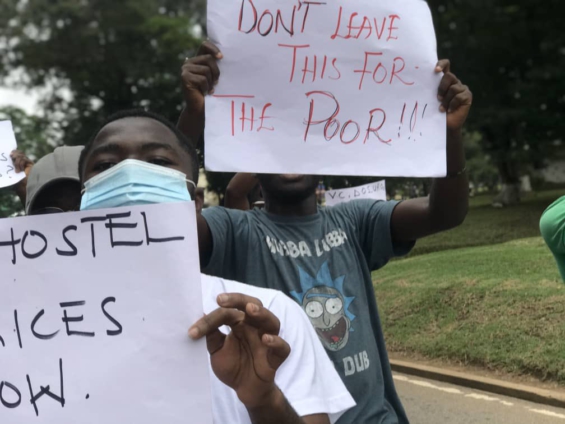 Students of the Kwame Nkrumah University of Science and Technology (KNUST) have embarked on a demonstration against what they described as, ‘killer increment’ in charges for accommodation.

The protest, on social media platforms with the hashtag, #FixKnustHostelPrices and on campus, is to demand that Management intervenes to stop the high cost of accommodation to be borne by students.

Some students who hit the streets on campus, kept chanting, “the son of the charcoal seller should have an accommodation” as they held placards with inscriptions such as, “Hostel prices higher than school fees? Poor students matter”.

“We can’t pay, speak for us,” the cry at the main administration #KNUSTLive. #FixKNUSTHostelPrices. pic.twitter.com/UdxTk5OHl9

According to JoyNews’ Nana Yaw Gyimah, the rent charges by some hostels, per annum, are as high as GH₵10,000.00 for executive rooms and GH₵9,000 for standard rooms. The least charge for a standard room is GH₵3,500.

Also, images circulating on social media alleged that some hostel authorities, have, in less than a week, doubled the charge for accommodation.

You presented this as your hostel prices and just within some few weeks, you decide to top up🤦🏾‍♂️ we aren’t in normal times and the economy of this country isn’t as it was..#fixknusthostelprices pic.twitter.com/vF7HXAPuRc

Speaking with Nana Yaw Gyimah, University Relations Officer, Dr. Norris Bekoe confirmed that information on the plight of the aggrieved students has reached his office.

He revealed that authorities of the University are engaging the relevant stakeholders, both the private hostel authorities and the hostel association under KNUST, to come to an amicable solution.

“Management led by the Office of the Dean of students, has been having some discussions with the hostel managers especially, those who have registered with us. The arrangement has been that their increment, if any, should not go beyond 10 per cent. Usually, the increment is between 10 to 12 per cent. So, most of them are adhering to that but those who are not registered with the University, are charging those astronomical rent.

“We have met the leadership of the students and we have actually appealed to them to rescind their decision to embark on that peaceful walk to the office of Rent Control Department. Because, what they want to do is what we are trying to do. That is, to speak to the owners so that they can reduce the rent,” he added.

Friday’s walk to the Rent Control Department, by the aggrieved students, Dr. Norris Bekoe noted, has been called off after engagements with the Students Representative Council (SRC).

“The leadership of the students have agreed not to embark on this walk but the discussion is ongoing. Even the hostels that are not registered with us, we have formed teams, so those people are going to engage the owners of these hostels one-on-one. Then we can have an amicable solution to some of these things.”

However, the Concerned Students Association of KNUST has submitted a petition to the University’s Management, describing the rise in accommodation charges as unimaginable and exorbitant, as many households are still struggling to make ends meet, owing to the adverse effects of the Covid-19 pandemic.

Adding that, “the self-actualization of individuals through education must not be compromised, much less to the exploitation by capital extremists all in the name of free market. This is not just an economic challenge but an issue of Human Rights.”

Meanwhile, Dr. Norris Bekoe has disclosed that the institution has entered into 55 agreements with private developers who want to build hostels on campus.

According to him, three of the developers will commence work in September this year.

“They are going to build something like a 20,000-bed capacity hostel. We have also been appealing to investors that if you want to invest in something so profitable, you can come to KNUST, we will give you land. You build, operate for about 45 years then you transfer the property to the university,” he further stated.