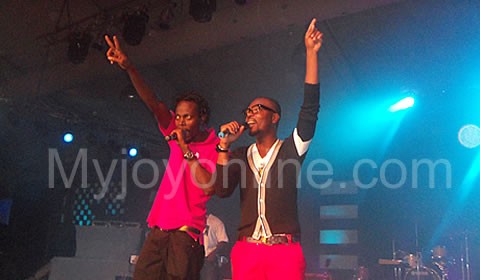 Radio personality, Kofi Okyere Darko popularly known as KOD and hiplife musician, Kwaw Kese, made sure they buried a feud that has festered since 2010 before entering into 2012.

Kwaw had issues with some personalities including, KOD, Jon Germain and Asem in his 2010 release Killa Bewu Last Show, a controversial track that sought to hit back at them for comments they made about him.

In the song, Kwaw said, “Ma tanfo ye M.A.B, Jon Gyimigyimii ena KOD” meaning, “My enemies are MAB, Jon the fool, and KOD.” The song instantly sparked a feud between the artiste and the personalities.

Jon Germain is reported to have said in an interview with the Sparxx Magazine that Kwaw Kese was his least favourite Ghanaian rapper and referred to him as a ‘comedian’ while KOD is alleged to have said “Kwaw Kese is no longer a musician” and that he has not released any new song and that, he needs to retire.

KOD’s comments came after Kwaw failed to clinch a nomination in the 2010 edition of the Ghana Music Awards. Kwaw Kese also known as Abodam rubbished the awards and questioned its credibility.

He cited KOD, who then managed Praye and Wutah, and Kiki Banson who manages songstress Becca, both members of the selection committee of the 2010 awards, as having conflicts of interests.

During the launch of Sarkodie’s Rapperholic album at the Dome of the Accra International Conference Centre on December 25, 2011, KOD, who was the MC for the show, and Kwaw Kese, who also performed at the show, decided to call a truce.

Prior to Kwaw’s performance, KOD had hinted on stage that he will be waiting for Kwaw Kese because he had some issues to trash out with him.

Interestingly, the man widely tagged as the King of the Streets requested KOD to join him on stage after his performance. Kwaw repeated the line, “Ma tanfo ye M.A.B, Jon Gyimigyimii ena KOD”, and said, “I’m sorry Jon Germain … Merry Christmas to you.”

KOD and Kwaw recounted memorable instances – when they worked together – on stage. KOD revealed that, “I have had quite a number of calls from prominent personalities in our country. They want to see me smoke the peace pipe with Kwaw Kese.” “What kind of pipe is that? Where is the peace pipe, is that the smoking pipe or it is just the tap water [from the] pipe?” Kwaw humorously questioned.

Amidst loud cheers, the two sealed the unification with a joint performance of Kwaw Kese’s Oye nonsense.