Komenda Assembly names half of its streets 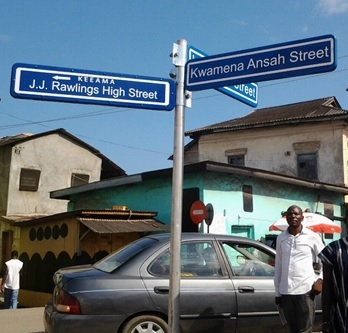 Komenda-Edina-Eguafo-Abrem (KEEA) Municipal Assembly in the Central Region has named 50 per cent of streets within its jurisdiction under the nationwide Street Naming and Property Addressing project.

Mr. Kow Hayford, Cape Coast Director of Town and Country Planning Department with oversight responsibility at KEEA, who made this known, said more than 80 per cent of the streets in Elmina have been named.

He announced this when the Municipal Chief Executive, Mr Isaac Kweku Sam led a team from the assembly to inspect the progress of the exercise.

Mr Hayford said more than 50 sign posts out of 63 streets scheduled to be named in Elmina have been erected.

He stated that scanning of the area using the area map and area photographs has been done and digitised and by March next year, persons with access to Global Positioning System could access any location in the Municipality.

Mr Sam described the exercise as very important since it would transform the municipality in terms of awareness, right location of destination and end the era where one suffers before locating a specific place.

He added it would also help the assembly get accurate, appropriate and reliable data on property in the municipality and enhance revenue mobilisation.

He explained that a street was named after the former President Jerry John Rawlings because of his pivotal role played in the development of the country.