Kotoko are not playing better than we are – Hearts coach Papic 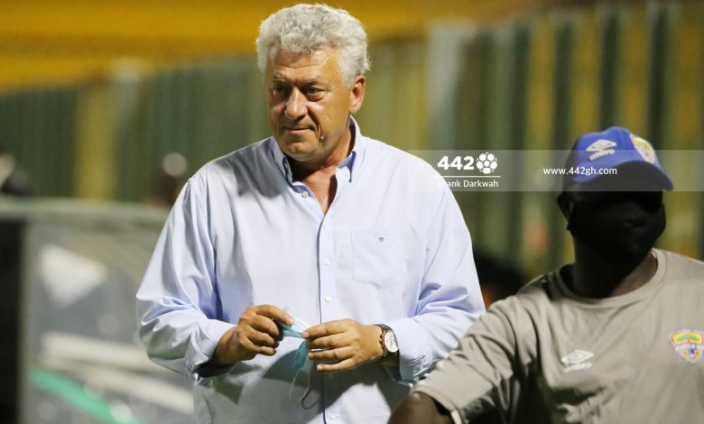 Kosta Papic does not believe Asante Kotoko are better than Hearts of Oak at the moment despite the Porcupine Warriors being top of the Ghana Premier League table.

The Phobians are six points behind Asante Kotoko, who went top for the first time on Sunday when they beat Karela United 2-0 in Aiyinase.

Despite the Serbian’s good start at Hearts which saw him register four wins in his first six games, the Phobians have slumped out of the top 10 after failing to win any of their last four games.

The chain of poor results have raised doubts about the ability of the Phobians to win the league for the first time since 2009.

However, in an interview with Nhyira FM, Papic insisted they still have a chance.

“My target is also the same, to win the league when the bad results are coming, But like I said if we find the winning formula we are going to catch those people who are ahead of us.

The difference is not big. The gap is not strong which is meaning we still have a chance. If we do a proper job, we are going to catch everybody and be in the position to fight for the title,” he said in an interview with Nhyira FM.

The Serbian said the club’s problem this season has been goal-scoring. Papic believes they would not be behind Kotoko if they were clinical in front of goal.

“I don’t think Kotoko [league leaders] are playing better than Hearts of Oak at the moment. We are playing good football but just lacking the goals. The problem with Hearts of Oak is we are creating chances but the team is unable to score the goals.

In the same interview, Papic said they will bring new players when the second transfer window opens from February 16 to March 18, 2021.

“We are looking to strengthen the Hearts of Oak team team in the transfer window. We will receive the scouting reports tomorrow for the list of potential players we could buy.

We need to strengthen the defense, midfield and striking zones during the transfer window but it’s all about the availability of the players I want.”