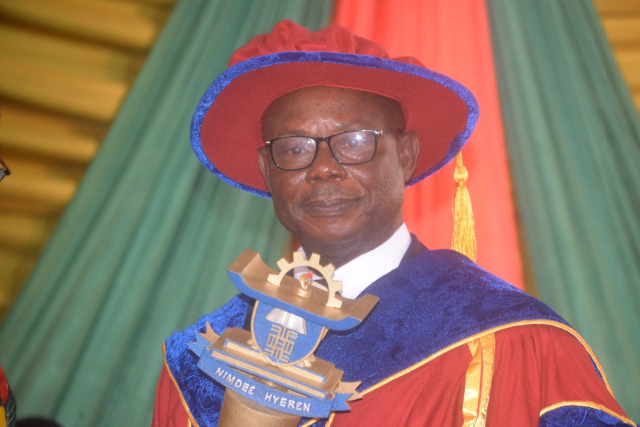 Professor Osei-Wusu Achaw has been appointed as the Vice-Chancellor of Kumasi Technical University.

Until his appointment, he was the Dean of the university’s Faculty of Engineering and Technology.

Speaking at his investiture, Professor Achaw hinted of redesigning the curricula to incorporate Information Technology and Artificial Intelligence.

“We need, as an institution, to understand the advent of Google and the internet has meant that students have access to most information a lecturer will seek to provide for them.

“Indeed, a diligent student can have access to more information than the lecturer can pretend to have. Thus the old approach where lecturers appeared to be a repository of knowledge is outmoded,” he emphasized.

Prof. Achaw pledged to pay more attention to developing expertise in pharmaceutical sciences to give the university its deserved recognition.

“The plan to make all these possible have already been set in motion with the development of a university-wide strategic plan, which we anticipate will provide a roadmap to becoming a world-class institution,” he stated with optimism.

The Minister of State in charge of Tertiary Education observed conversion polytechnic into technical university has been marred by intermittent strike.

Professor Kwesi Yankah urged the new vice-chancellor to take steps to iron out problems associated with the transition.

“This transition process has been far from smooth, I must say. It’s been rather turbulent and yielded considerable instability on the Technical university landscape, standing the risk of undermining its own essence.

The expression, ‘Technical University Teachers Association are on strike again’ is now a household statement,” he noted.

Professor Osei-Wusu Achaw was born on 14th December, 1962, at Ankaase in the Lake Bosomtwe enclave in Bosome-Freho District of the Ashanti region.

He earned a Doctor of Philosophy (PhD) in Chemical Engineering at the Kwame Nkrumah University of Science and Technology in 2005.

Professor Osei-Wusu Achaw is foundation lecturer and Head of Department of Chemical Engineering of the university.

He is a member of the Ghana Institute of Engineers and Association of Ghana Industries as well as being an associate of Empretec Foundation.

He is also into microbial synthesis of ethanol, safety and waste treatment in the petroleum refinery industry to Modelling Biomass Combustion.

DISCLAIMER: The Views, Comments, Opinions, Contributions and Statements made by Readers and Contributors on this platform do not necessarily represent the views or policy of Multimedia Group Limited.
Tags:
Kumasi Technical University
Professor Osei-Wusu