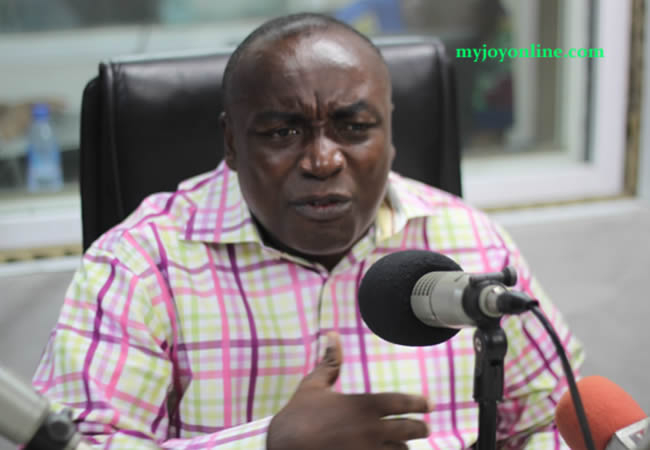 Suspended General Secretary of the New Patriotic Party, Kwabena Agyepong has responded to reasons the party says led to his indefinite suspension about a week ago.

In a statement, Mr Agyepong said he rejects all of the reasons ascribed by the NPP for my suspension, saying they are attempts to “impugn my reputation and tarnish my good name”.

The General Secretary was suspended for violating Article 3(D) of the party’s constitution which enjoins members to publicly uphold the decisions of the party, through various acts.

He was also accused of engaging in “unilateral actions and activities without consultation of, or authorization by the NEC.”

However, Mr Agyepong argues the charges leveled against him are unfounded.

Below is a copy of the full statement:

SETTTING THE RECORDS STRAIGHT: MY  RESPONSE TO THE COMMUNIQUE ISSUED BY THE DIRECTOR OF COMMUNICATIONS  OF THE NEW PATRIOTIC PARTY(NPP ) ON  THURSDAY DEC. 10TH 2015 ASCRIBING REASONS FOR MY  INDEFINITE SUSPENSION FROM THE OFFICE OF GENERAL SECRETARY.

On Thursday December 10 2015, the Director of Communications of the New Patriotic Party (NPP) issued a communiqué, on the meeting of the National Executive Committee (NEC).  The communiqué confirmed the NEC’s endorsement of the Disciplinary Committee recommendation to suspend me indefinitely from office as General Secretary of the NPP.

After a detailed study and deep reflection on the communiqué, I wish to take this opportunity to repudiate and totally reject all of the reasons ascribed by the NPP for my suspension, especially any intended or unintended attempts to impugn my reputation and tarnish my good name.

I will like to first refresh our minds of the NPP’s charges and then go on to answer each one of them thoroughly, comprehensively and honestly. So here we go:

A)      Violation of Article 3(D) of the NPP constitution which enjoins members to publicly uphold the decisions of the party, through various acts including;

The legality or otherwise of the NEC decision of 23rd October 2015, has been under judicial contention since the day it was taken. Indeed, it is now the subject of a formal law suit which is yet to be determined.

As General Secretary, I had to make a judgment call on how my conduct will best uphold the letter and spirit of the Party’s constitution and the laws of Ghana which also bind the operations of all political parties in the country.  This, I had made known earlier in a letter dated September 18, 2015 addressed to the Council of Elders and the National Disciplinary Committee.

It is therefore my humble opinion that pending the determination of the current legal action, the charge of disregarding the NEC decision of 23rd October 2015 is at best unproven.

ii.       Various Public statements he made that cast the Party in bad light.

I wish to state for the record that since September 2, 2015, when the Presidential Candidate called for a halt to all discussions of internal party issues in the media, I have not spoken in any shape or form that could be considered as putting the party in a bad light; whether by interview, press conference, response to personal attacks or on anyone’s behalf.

I stand ready to have the above assertion be proved otherwise by concrete and verifiable evidence.

B)      He engaged in unilateral actions and activities without consultation of, or authorization by the NEC, such as;

i.        Writing to the Electoral Commission designating only him and suspended Chairman Afoko as the only authorized signatories.

This charge is untrue. I have not, repeat, NOT written any such letter to the Electoral Commission; which fact could have easily be verified.

The facts are as follows: Earlier this year, the Deputy General Secretary and some Regional Chairmen wrote to the Electoral Commission (EC). The EC response was that as per the laid down procedures of the Commission, and in accordance with the Political Parties Act 2000, communication to the Commission is done mainly through party’s General Secretaries.

The EC followed up its response with an instruction to all political parties reminding them that all correspondence between it the EC and political parties should be done through the General Secretary/Chairman.

The EC further instructed that IPAC will from now on only admit three Representatives from each political party namely, the National Chairman, General Secretary and one other.

The granting of waivers to parliamentary aspirants who have shown commitment to the Party by General Secretaries of the NPP is a precedent established by previous occupants of the position. For example, in 2011, the incumbent  General Secretary granted waivers to many including Anthony Karbo and  Dr. Ayew Afriyie without recourse to NEC or the NPP’s Steering Committee.

In my case, most of the waivers went to the Volta Region, at the request of the Regional Chairman, Mr. Peter Amewu; in constituencies where we have traditionally struggled to fill candidates.

In the case of Peter Mensah, the gentleman who suffered an acid attack in the course of duty as constituency organizer, I justifiably granted him a waiver after receiving the request from him and some executives of the Techiman North constituency. Development fees were waived for the following; former National Organizer Bamba; former MP Effah Dartey, former MP Mrs. Cecilia Amoah; as well as Dr. Ayew Afriyie who has supported the party through AFAG. The Steering Committee was accordingly informed.

There is no record of protest or indeed any disciplinary action against any of my predecessors for the actions or their reasons for granting waivers which also followed past precedence.

So obviously, this is ‘trumped up’ charge.

iii.      Non-reference of legal matters to the proper legal Committee of the Party

There are several past precedents where the party has acted outside of the constitutional committee in legal matters. For example, the immediate past administration instructed Madam Joyce Opoku Boateng to represent the party in court on the Manhyia, Kumawu and Juaben cases. The person assigned was NOT a member of the constitutional Committee neither was she appointed by same.

It will be recalled that the composition of the  Party’s legal team was decided on by the Presidential Candidate, National Chairman and General Secretary although it was the National Council that gave the green light to go to court

This is blatantly untrue and can be easily verified. There is no evidence to support this assertion. Rather, it can be easily established, through reference to minutes that I passed on the report of the National Appeals committee to the Steering Committee and the National Executive Committee without any alteration whatsoever.

Regrettably, this is another ‘trumped up’ charge without an iota of truth

v.       Misrepresentation/misleading of NEC on status of some constituency primaries

At the NEC meeting held on the 3rd of December, 2015, the General Secretary solicited the views and response of members of NEC on this accusation of Misrepresenting / misleading of NEC on status of some constituency primaries which came from the Member of Parliament for Adansi Asokwa, Hon. KT Hammond, who was also present in the meeting. When the question was put to the house, none confirmed this allegation.

It is useful to recall that at the NEC meeting held on August 18, 2015 when the decision was taken on the primaries in Adansi Asokwa, it was both the Ashanti Regional Chairman and the 3rd National Vice Chairman, whose views persuaded the NEC to overturn the National Appeals Committee decision to disqualify aspirant Mr. Richard Anokye and uphold the earlier regional vetting committee decision to allow him to contest in the parliamentary primaries.

vi.     He, in conjunction with suspended Chairman Afoko and Sammy Crabbe, launched Party cards without authorizations from NEC

Article 9 (5) 9a) of the NPP’s constitution enjoins the Party’s Finance Committee to raise funds to support the activities of the party. It states clearly that “It shall be the duty of the Finance Committee to raise funds necessary to finance the operations of the party in conformity with the applicable laws. It shall report on its activities to the National Chairperson.”

The Finance committee duly invited proposals and reviewed same from six companies. On a near unanimous vote, the committee accepted the proposal from   Paymanex Limited. Subsequently, the Party Chairman approved the recommendation of the committee which led to the actions taken to launch the card. The NEC was duly informed.

I want to reiterate that, for the avoidance of doubt, I placed all the foregoing facts before the Disciplinary Committee during my encounter with them. I was asked to recuse myself during the subsequent NEC meeting and therefore was denied the opportunity to participate in the deliberations.

I would to like state that the only purpose for putting out this statement is to correct the inaccuracies contained in the NPP communiqué of December 10 2015 and for no other purpose.

I believe there is already an ongoing action which will clarify the merits or otherwise of the legality of the removal of officers elected by the supreme body of the party, i.e.  The National Delegates Congress

My attention has also been drawn to a purported transcript of my encounter with the Disciplinary Committee of the NPP which was first published by myjoyonline.com. I wish to state categorically that I completely reject that doctored account which is only calculated to soil my good name through innuendos and aspersions.

I will deal separately and comprehensively with the allegations made in that false report and furnish all with a copy of the genuine minutes of the Disciplinary Committee as submitted to the NEC of the NPP.

My commitment, dedication and long standing service to this tradition is a matter of public record. As a loyal member of this party, I shall continue to offer my support and prayers in our quest for victory in 2016.

I take this opportunity to wish all members of the NPP and fellow citizens of Ghana a very Merry Christmas and Happy New Year.

May God bless us

Long Live the Republic of Ghana