Kwabena Brakopowers: Alan or Bawumia? A choice that goes beyond ethnicity 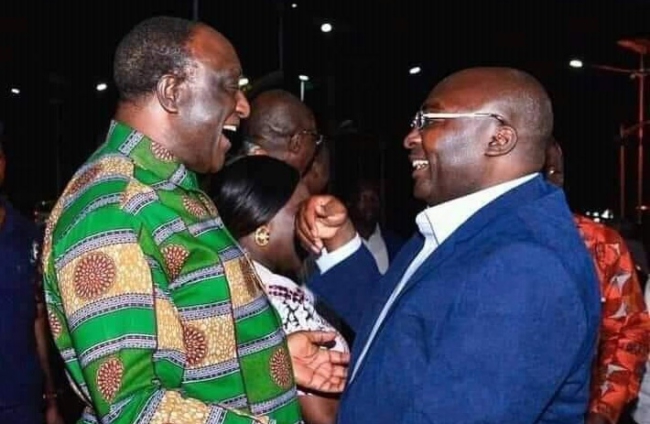 Should the President of Ghana be rotational? Is there an urgent need to ensure that all the ethnic groups in the country have the opportunity to produce a president? Also, is the concept of rotational presidency the solution to the oft-cited domination by one ethnic group over the others? And finally, is power rotation in conformity with democratic practice?

The answers to these questions hold the key to the present dilemma facing the governing New Patriotic Party (NPP) as it prepares to elect a new flagbearer ahead of the crucial 2024 General Election. The present debate within the party is centered around the need to break the Akan domination by giving an opportunity to a candidate from another ethnic group to lead it.

Many of these people advocating a Presidential Candidate from non-Akan ethnic groups, including the leader of the Majority Caucus in Parliament, Osei Kyei Mensah Bonsu, are concerned about extending the party’s rule after the ritual eight-year term for political parties in Ghana. These persons are also concerned about dispelling the decades-old impression about the party being non-accommodating of candidates from minority ethnic groups. If you’re new here, the ritual eight-year term simply means that political parties are often given eight years to implement their policies after which a new party is voted into office. This has been the situation since 1992 when Ghana staged a grand return to democratic rule after periods of protracted military takeovers and tyrannical rule.

“If the NPP settles for another Akan, there is going to be that feeling from persons from the Northern regions who have been voting for the NPP that the NPP uses them and dumps them. For example, the late Aliu Mahama, may he rest in peace got less than 7 percent in 2007 Presidential race of the NPP. So that could let people think they only use them for votes and judging from 2020 elections,” Mr Mensah Bonsu said in an interview.

Even though he claimed he did not endorse the current Vice-President, Dr Mahamudu Bawumia in his submission, the leader of Government Business in Parliament has been roundly upbraided by some NPP supporters and social commentators, for his comments. It is also important to note that Mr Osei Kyei Mensa Bonsu’s comments have been welcomed by other party supporters who believe the time has come for a leader from particularly, the Northern Region. I watched and listened to the interview in which Mr Mensah Bonsu made that rather loose and unsavoury comment and my conclusion was that he was playing to the gallery.

Ghana, like most African countries, including Nigeria, has a multi-ethnic, multi-religious and multi-cultural society. According to the Ghana Statistical Service in 2000, we can boast of major groups such as the Akan, the Mole Dagbani, Ewe, Ga Adangbe, Guan, Gurma, Grusi and Mande-Busanga. And despite easy geographical and social mobility from various ethnic groups, rivalries exist dating back to the colonial era. We have made significant progress on this front and we can all testify to same. But the time has come for us to move on as a country and stop reciting this old rhyme of ethnic sabotage. It’s no longer fashionable to do that these days. However, this doesn’t mean we have to stop working towards achieving complete harmony, leading to a shared development.

In his attempt to address ethnic concerns in Nigeria, General Sani Abacha inaugurated the National Constitutional Conference between 1994 and 1995 to among other things, (a) propose the rotation of executive positions, namely president, governors, and local government chairmen, and other key leadership positions in the National Assembly, among others, (b) demarcate Nigeria into geopolitical zones, (c) review all previous constitutions tackle problems of past failed attempts at democratization, and (d) chart a way for the entrenchment of democracy in Nigeria.

After an extensive discussion, the rotational arrangement was not recognized in the 1999 Constitution of the Federal Republic of Nigeria. However, Power rotation became an internal arrangement by the People’s Democratic Party (PDP) in its Constitution 1998. The rotational presidency did not particularly appeal to the members of the NCC because of the need to encourage competition in any serious democracy.

I think the NPP can follow in the footsteps of Nigeria’s PDP if it is desirous of having the various ethnic groups represented in its leadership. It has to start by making changes to its Constitution and providing for the rotation of its Presidential Candidate among the various ethnic groups. It doesn’t take mere commentaries in the media to have this done, although it is a good place to start the debate. It takes real-time action to get the job done well and I expect the NPP to do the right thing. Changing the NPP Constitution, I believe is the best approach to settle the present conundrum once and for all. Until this is done, I think it will be sheer petty and mere politics to suggest that only non-Akans should be considered for the party’s flagbearer ahead of the 2024 General Election.  It is my considered view that such half-baked appeals are nothing more than the cries of overly pampered children who are concerned about their temporal interest only.

Presently, the two leading names as far as the NPP’s 2024 Presidential Candidate is concerned are Trades and Industry Minister, Alan John Kyerematen and Vice-President Dr Bawumia. These two stand tall and tower above any other person born of man and woman who is thinking or yet to consider offering himself or herself up for the flagbearer position. I think the choice should be made based on competence, proven track record, delivery, and grassroots connection.

It is worthy of note that the days of a pity party and party pity are long gone. Today’s generation of Ghanaians will vote for any candidate primarily not because of his/her ethnic background, but rather his/her proven ability to deliver public goods. In fact, there is no need to stifle healthy competition in the name of erasing people’s perception of the New Patriotic Party as non-accommodating of non-Akans. Available records show that the NPP has neither won nor lost an election because of this so-called perception. What is true is that perception is often a mirage, which holds true only in the eyes of the viewer.

May the best candidate wins.

A. Kwabena Brakopowers is a development communications practitioner, journalist, and author whose works focus on communication, migration, international relations, and politics. He could be reached at brakomen@outlook.com