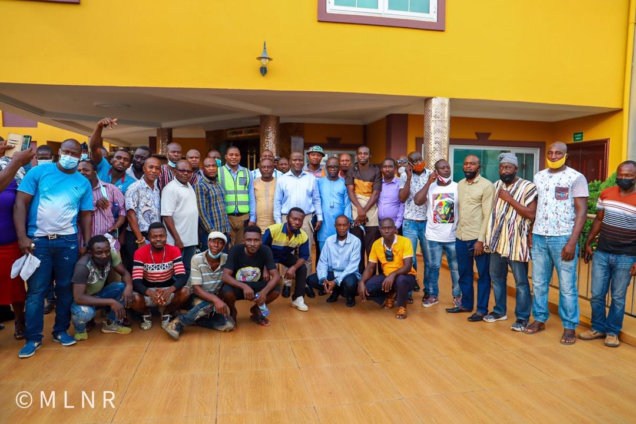 Ministry of Lands and Natural Resources has stepped in to resolve the impasse between Small scale miners and AngloGold Ashanti over mine concession.

There has been growing agitation for AngloGold Ashanti to relinquish part of its concession to small scale miners at Obuasi.

In 2016, AngloGold voluntarily relinquished 60 percent of its Obuasi mine concession to the government.

But miners believe the company has to give out more of the concession to enhance their work.

At a meeting with the Minister for Lands and Natural Resources, Samuel Abu Jinapor, the smallscale miners asked for additional land to be released.

According to the small scale miners, not all communities benefited from Anglogold’s concession release.

They are currently pointing at the Abompeh and a tailing site as priority areas of interest.

Leader of the miners, Kofi Adams, says access to neglected lands by Anglogold is key to providing employment for the youth.

“The concession given to the small scale miners is not enough. So we want the company to give us part of the places we’ve mentioned and that will help create employment”, he said.

The relinquished concession is rich in minerals, enough for the small scale miners.

Anglogold is currently operating on 30percent of the 475 km square concession.

“We have told our stakeholders on several occasions that the area is a no go area. The tailing area is a red line. Tailings are not areas we have to play with. The areas they are talking about forms part of our future plans for the mine”, he said.

Minister for Lands and Natural Resources, Samuel Abu Jinapor at a meeting with managers of Anglogold Ashanti and the smallscale miners called for calm as a solution is sought.

“I will plead for calm. Just exercise restraint and count on me. The Minerals Commission CEO is here and together we will look into the issue and find a solution”, he assured.

Mr Jinapor is on a two-day working visit to the Ashanti Region.