Leicester fight back to hold Spurs

Tottenham Hotspur lost ground in the race for the Premier League title after a 1-1 draw at home to faltering champions Leicester City on Saturday.

Vincent Janssen's first Premier League goal, from the penalty spot, gave Spurs the lead at White Hart Lane but this was cancelled out by Ahmed Musa as Leicester manager Claudio Ranieri extended his unbeaten record against Tottenham to 11 league games.

Spurs started the weekend just a point behind the top three but this result extended their winless run in all competitions to five games and left them three points off the summit after north London rivals Arsenal and Manchester City both won on Saturday, with Liverpool still to kick-off against Crystal Palace.

The draw at White Hart Lane saw Leicester collect their first away point of the season after four league defeats on their travels this term.

Leicester may be on the verge of qualification for the knockout stages of the Champions League, but it was Tottenham who had the game's first clear chance when Dele Alli forced Kasper Schmeichel into a 15th-minute save with a long-range shot after the Foxes failed to clear a Christian Eriksen corner.

Eriksen was next to try his luck with a 25-yard free-kick that drifted just past Schmeichel's right-hand post.

Leicester kicked-off having already lost more times on their travels than they did throughout the whole of last season, with England striker Jamie Vardy as yet unable to repeat his goal-scoring heroics.

Vardy wasted the kind of chance he would surely have taken during the Foxes surge to the title when, on the half-hour mark, a breakaway saw Tottenham opened up only for the forward to fail to collect Musa's pass. 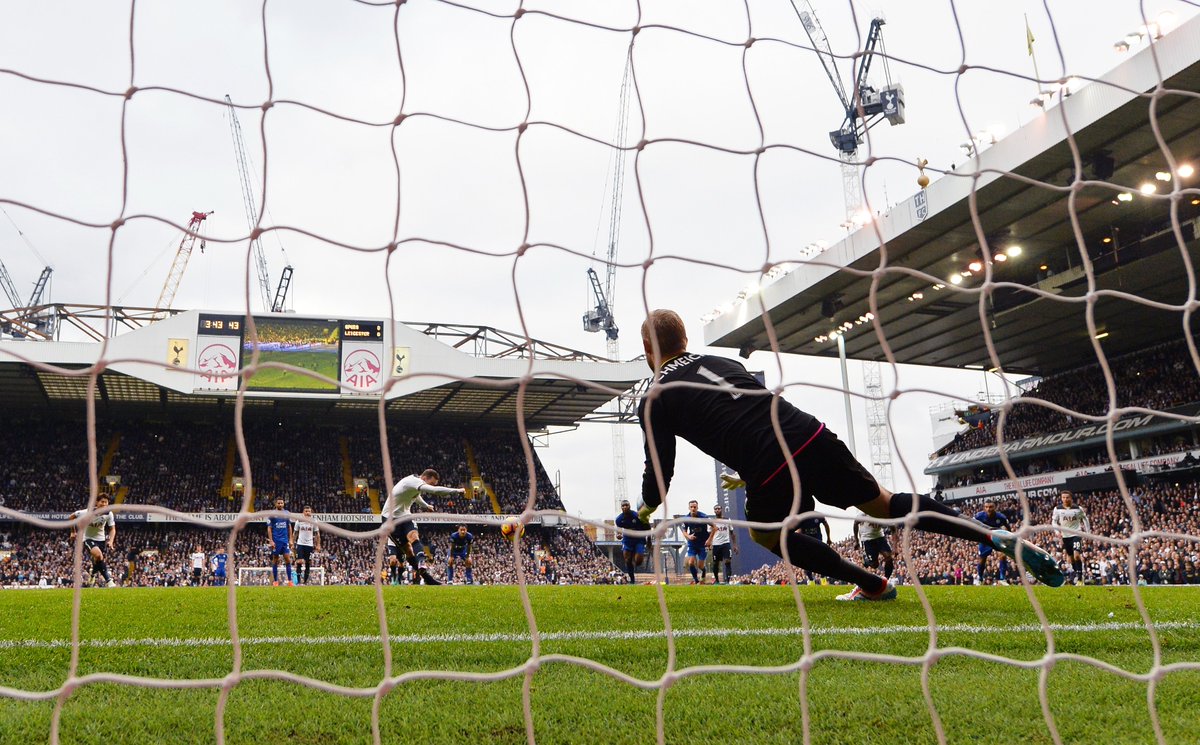 Leicester went even closer to opening the scoring when a Riyad Mahrez cross saw Shinji Okazaki head just over the crossbar.

Christian Fuchs scored his first goal for Leicester last weekend and he almost followed that up with another spectacular effort on Saturday, striking Mahrez's corner just wide from distance.

But while Leicester had worked their way into the game, the home side still looked the more dangerous of the two teams.

That was evident when a sweeping move saw Kyle Walker cross for Alli to thump his first-time shot against the crossbar. It was a warning to Leicester and it wasn't heeded as Spurs took a 44th-minute lead via Janssen's penalty.

Robert Huth was penalised for bringing down the Dutchman, although the contact appeared minimal, and Janssen took full advantage of referee Robert Madley's decision to award a spot-kick with a well-struck shot.

It took Leicester just three minutes of the second half to draw level thanks to Musa.

Vincent Wanyama's loose header was collected by Vardy who showed good pace before crossing low for the £16.5 million Nigeria winger to fire home from close range.

It was a jolt to the system for Mauricio Pochettino's Spurs side as Leicester had threatened without ever looking likely to score in the first-half.

Tottenham once again had to break down Leicester, who had conceded four goals at both Liverpool and Manchester United this season, but were looking a more resolute and organised side this time around.

Eriksen drew a smart save out of Schmeichel on the hour mark before Janssen's free-kick just failed to dip under the bar.

Tottenham still had one more chance to win the game but Jan Vertonghen saw his header from Wanyama's cross hit the woodwork in the closing stages.