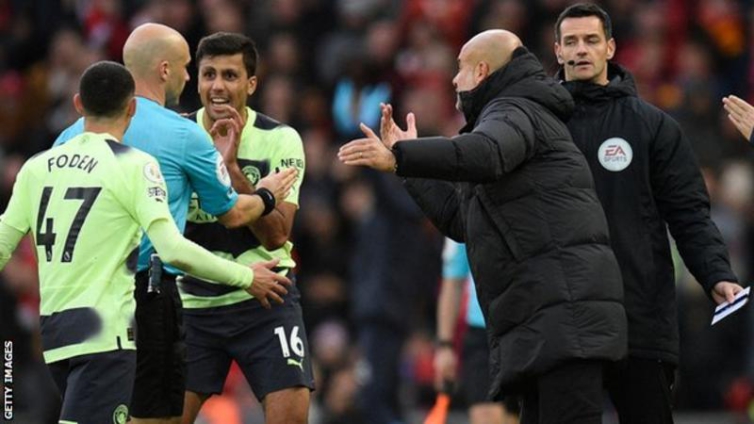 Manchester City boss Pep Guardiola said members of the Anfield crowd threw coins at him during his side’s 1-0 Premier League defeat at Liverpool.

Guardiola said the objects were thrown in his direction after Phil Foden had a goal disallowed by VAR as City’s unbeaten start to the season ended.

“The crowd tried but they didn’t touch me,” Guardiola told BBC Radio 5 Live. “Maybe next time they will be better.”

Liverpool, meanwhile, condemned “vile” chanting from the away end.

“We are deeply disappointed to hear vile chants relating to football stadium tragedies from the away section during today’s game at Anfield. The concourse in the away section was also vandalised with graffiti of a similar nature,” the club said in a statement.

“We know the impact such behaviour has on the families, survivors and all those associated with such disasters.

“We are working with the relevant authorities and we will also work with Manchester City in order to do our utmost to ensure these chants are eradicated from football altogether.

Liverpool have also opened an investigation into the coin throwing.

A club spokesperson said: “We are aware of an incident involving objects being thrown into the technical area at today’s game. This is totally unacceptable behaviour and not the standards of behaviour we expect at Anfield.

“This incident will be fully investigated using CCTV and those found guilty will be punished, including a lifetime ban from Anfield Stadium and a possible football banning order.”

Merseyside Police said it is “working closely” with both clubs to investigate the incidents at Anfield.

“We have been made aware that offensive behaviour had taken place during the Liverpool v Manchester City game, and that offensive graffiti was sprayed in the away section,” said a police statement.

“Such behaviour will not be tolerated, and we are working with both clubs to identify and bring to justice anyone found responsible for committing offensive behaviour.”

DISCLAIMER: The Views, Comments, Opinions, Contributions and Statements made by Readers and Contributors on this platform do not necessarily represent the views or policy of Multimedia Group Limited.
Tags:
EPL