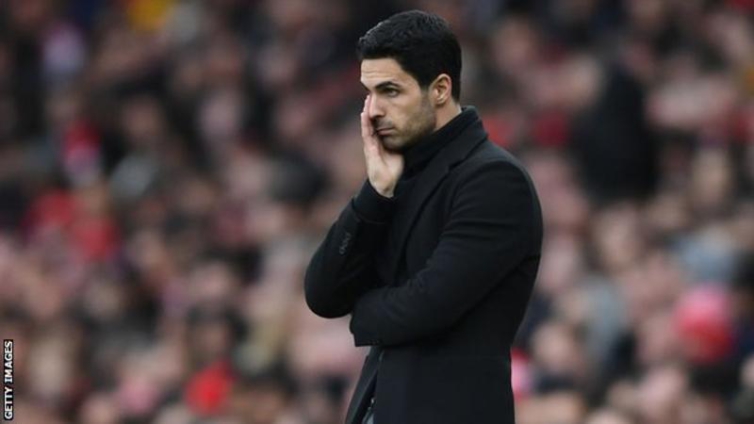 Mikel Arteta says his Arsenal side were punished by Liverpool because they “completely crashed” during a comprehensive defeat at Anfield.

The Gunners were beaten 4-0 and conceded three of those goals in a 25-minute spell during the second half.

It brought Arsenal’s 10-game unbeaten run in all competitions to an end.

“At 1-0 down we go to half-time, it is the moment we have to be patient but we were completely the opposite,” said Arteta.

“We completely crashed. That’s why we lose the game – the rest is a consequence of the frustration of having to chase the game.”

The visitors gave the ball away while trying to play out from the back on several occasions, with Diogo Jota sparking the second-half flurry after pouncing on Nuno Tavares’ loose pass.

Sadio Mane, Mohamed Salah and Takumi Minamino were also on target for the hosts.

Speaking to Sky Sports, Arteta added: “We know they will punish you. They can press, they are one of the best at it. Mistakes are a part of football.

“We showed for 45 minutes we could compete with them. We crashed for 15-20 minutes, we threw the game away and that is the learning from today.”

‘You can be greedy and we were’

Liverpool boss Jurgen Klopp said it was “always important to win home games” but even more so given his side had failed to win their past two Premier League outings.

A defeat by West Ham before the international break followed a 2-2 draw with Brighton at Anfield in which they had led 2-0 after 24 minutes.

But this victory sees the Reds climb to second, at least until Manchester City play on Sunday, three points behind leaders Chelsea.

“It wasn’t a top-class performance but it was very controlled and mature and exciting in other parts,” Klopp told Match of the Day.

“The goals we scored were well played, worked for in counter-pressing situations. I like these goals because they cause problems for the opponents – you can be greedy in these situations and we were today.”

Klopp was also asked about an altercation in the first half that saw him and Arteta having to be separated on the touchline, resulting in both managers being booked.

“It wasn’t the plan,” he said. “The situation was that Sadio [Mane] goes for a clean heading challenge, no one makes a foul and they get up and for me it’s a bit too obvious that there was nothing.

“He’s just a physical player. You can’t do that, it happens too often and it’s not right. When they rise up from the bench it’s difficult to not get up and say something.”

Arteta says the pair spoke after the game and “these moments are left on the pitch”.