Playback: The Probe discusses ‘Cost of Living: Weighing the demands of workers’ 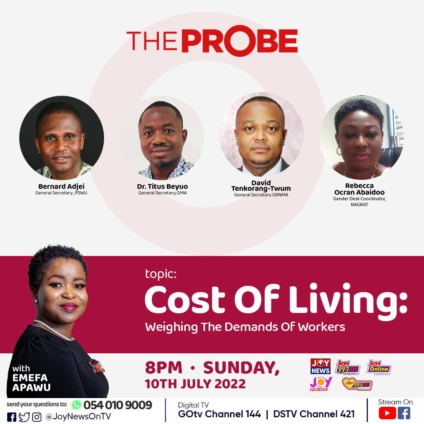 Amidst the economic hardship that has dragged the country to the International Monetary Fund (IMF), some organised labour unions are demanding the Cost of Living Allowance (COLA).

Teacher unions have declared an “indefinite strike” over the government’s failure to pay the Cost of Living Allowance (COLA) they asked for.

Both unions have issued press statements concerning the current economic hardships nurses and midwives are experiencing.

According to the GRNMA, the plight of the Ghanaian nurse and midwife is worsening every day in the face of the increasing prices of goods and services, with insufficient salaries, not affording members the opportunity to have any decent living.

The associations have, therefore, called on the government to initiate measures to implement the 20% Cost of Living Allowance (COLA) that the GRNMA and other organised labour groups have called for within the past few months.

Tonight, The Probe took a dive into all the plights of these concerns raised by the organised labour groups.