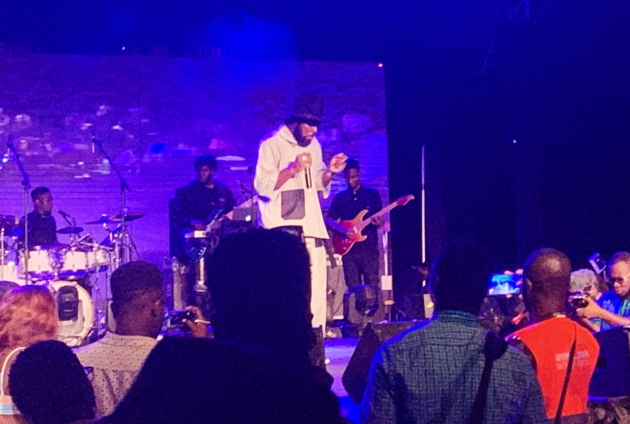 On Sunday, December 18, fans of M.anifest made their way to the Bukom Boxing Arena as they do periodically to party with their favourite rapper.

The show was hosted by Kojo Manuel who was joined by DJ Pizaro, BBrave, Eff The DJ and others.

Prior to the event, the patrons had been promised maximum entertainment, not from just the godMC but from other acts including some new personalities in the industry.

The fun began when the ‘Gen Next’, as M.anifest calls them, took the stage to perform.

From Baaba J and Juma Mufasa to Marince Omario these young musicians stunned the audience with their performances and kept the arena alive and prepped for M.anifests arrival.

The winner of the ‘Clean and Pure’ challenge, Kookusi also stepped to the stage to perform his rendition.

In collaboration with a live band, the musician also teased a new song off his upcoming project and the title track of his recently released ‘5Foot3’ EP.

Perhaps one of the most fun highlights of the night was when producer turned-musician Yung D3mz took the stage.

He delivered an end-to-end showcase, wooing women in the VIP section with his lyrics and momentarily moved in an Asake-like motion on stage. He got parts of the audience laughing while others chanted and danced along with him.

There was never a dull moment.

Other acts took the stage to perform. Cameroonian singer/songwriter T’Neeya impressed many with her performance but it was her crowd-moving rendition of Magic System’s ‘1er Gaou’ that sealed the deal.

Kwesi Arthur had partons dancing and The Cavemen amazed patrons with their highlife-inspired tracks were just right to welcome M.anifest to the stage.

The godMC opened his performance With Madina to The Universe, performed Bob and Weave and an acapella of Blue (What Dey Happen).

But that was just the tip of the iceberg he perform No Fear, La Vida, We No Dey Hear, B.E.A.R, Game Over and many other hits.

M.anifest knows what his fans want so he pulled a surprise on them when he brought Worlasi on stage.

The duo performed the fan favourite 100%.

Meanwhile, Gyakie closed the show performing some of her biggest hits including Something.

In all, it was a night to remember as social media is already rife with fans expressing their elation.

DISCLAIMER: The Views, Comments, Opinions, Contributions and Statements made by Readers and Contributors on this platform do not necessarily represent the views or policy of Multimedia Group Limited.
Tags:
Bukom Boxing Arena
M.anifest
Manifestivities