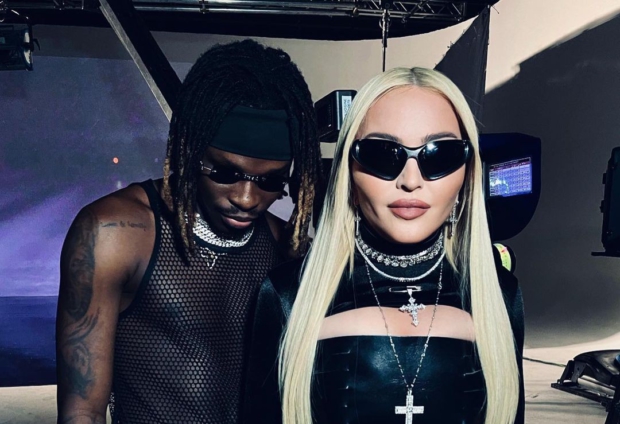 Madonna’s “Frozen (Remix)” ft. Fireboy DML received a music video treatment. Released on Thursday, March 10, the visual sees the Queen of Pop showing off her chemistry with the Nigerian crooner.

The clip opens with the 63-year-old walking through a smoky area while singing the Afrobeats version of her 1998 hit.

The music icon flaunts her sexy figure in a black leather outfit that she pairs with fishnet stockings, knee-high boots and her signature Madame X cross jewellery.

DML then shows up, chanting his verse while dancing with Madonna. “I thought you loved me/ I thought you trust me,” he sings. “I tried to take care of your heart, but it’s frozen/ Why can’t you show me, don’t leave me open/ I thought you told me, that you’re ready, but you’re broken.”

The new version of the track arrived on March 3. Following the song release, DML gave a shout-out to Madonna on Instagram. “Frozen rmx. @madonna @sickickmusic out now. love to the queen for having me on this classic,” he gushed.

This arrived after Madonna teased a joint tour with Britney Spears. When hopping on Instagram Live on January 26, a fan asked her whether she would do a world tour again. In response, she exclaimed, “Hell yeah. I have to. Stadium baby. Me and Britney.”

“Not sure if she’d be into it, but it would be really cool. We could like, reenact the original [kiss],” Madonna added. She was referring to her and Britney’s smooch at the 2003 MTV Video Music Awards.

Madonna and Britney shared a kiss during their opening performance for the event. The former was singing her single “Hollywood” when she leaned over Justin Timberlake’s ex. After kissing Britney, Madonna locked lips with Christina Aguilera who was also onstage.

DISCLAIMER: The Views, Comments, Opinions, Contributions and Statements made by Readers and Contributors on this platform do not necessarily represent the views or policy of Multimedia Group Limited.
Tags:
Fireboy DML
MAdonna