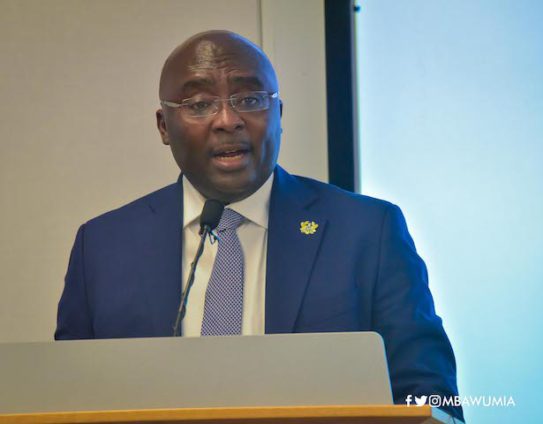 Vice President and Head of the country’s Economic Management Team, Dr Mahamudu Bawumia, has stated that all major infrastructure projects executed by the Government since 2017 were financed through loans.

The Vice President indicated that the projects were in the areas of health, roads and transportation, and education.

He was speaking on the state of the Ghanaian economy at a conference organised by the National tertiary Students Confederacy (TESCON) – the student wing of the New Patriotic Party (NPP) at Kasoa in the Central Region.

He also stated that the government had spent a cumulative amount of ₵50.1 billion (the equivalent of $7 billion) on three items of expenditure – Covid-19, excess capacity, and banking sector cleanup.

That expenditure, the Head of the Economic Management Team, said were equally financed from borrowing, and noted that between 2019 and 2021, Ghana’s debt to GDP increased by 17.6 percentage points GDP.

He said: “It should be noted that without the 15.1 billion of the exceptional items – the financial sector and then the energy and Covid, Ghana’s debt to GDP would have been about 68 percent instead of the current 80 per cent.”

He acknowledged that the country was going through a period of economic hardship, just as in other parts of the world because of the outbreak of the Covid-19 pandemic and the recent Russia-Ukraine conflict.

The Vice President, quickly added that the government had set out to build a modern prosperous economy, anchored on several elements of the economic transformation.

They include the government’s industrialisation drive, the One District-One Factory (1D1F) initiative, development of the Automotive Industry, Bauxite and Aluminium Integrated Industry.

Others are Planting for Food and Jobs (PFJ), Rearing for food and Jobs, and the establishment of the Tree Crop Development Authority.

In easing the hardship on Ghanaians, Dr Bawumia said the government had scrapped 18 taxes and levies alongside revenue increase since 2017.

The relaxation of the Covid-19 restrictions and the opening of the land borders would result in increased economic activity and economic growth.

Beyond the measures above, government is focused on productivity through diversification of production of raw materials to value addition.

Prior to the current state of the economy, Ghana was described by the International Monetary Fund (IMF) and World Bank as the fastest growing economy in Africa.

The IMF for example predicted a growth rate of 8.8 per cent in 2019 in its World Economic Outlook, but it ended that year with a growth of 6.5 per cent.

Also, the country was identified as a destination of choice for Foreign Direct Investments (FDI) in West Africa by the United Nations Conference on Trade and Development (UNCTAD).

The economy, however, saw a sharp decline with the onset of the Covid-19 pandemic, with a GDP of 0.4 per cent in the full year of 2020.