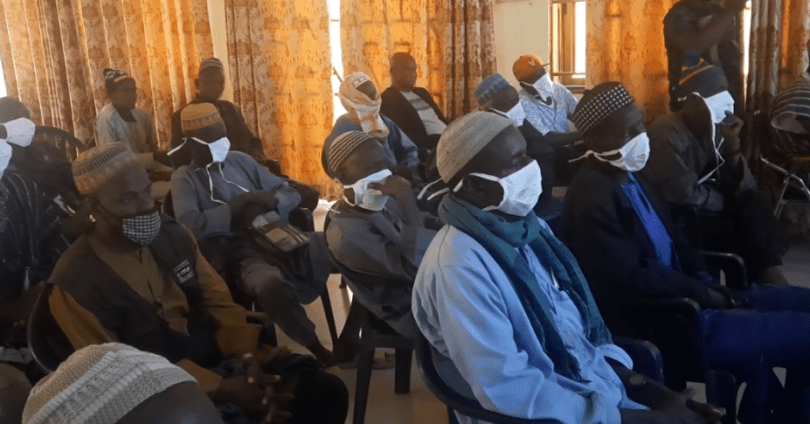 Residents of Mamprugu Moaduri in the North East Region are in a state of fear and panic following the invasion of gunmen who are said to be foreign elements.

These gunmen are believed to be part of an organised criminal network going about on motorbikes in communities in the district, taking people hostage at gunpoint and demanding ransom from their families.

Chiefs and opinion leaders are worried, thus are calling on the government for increased security presence to prevent the kidnappers from turning their attention to the local population.

The armed men are suspected to be Burkinabes. They are said to be collaborating with local armed gangs who are already involved in highway robberies.

On Friday, December 24, the district authorities in collaboration with the Regional Security Council organised a dialogue session with members of the Fulani community on how to deal with the security threat.

District Chief Executive, Abu Adams, who moderated the event, in his opening remarks said: “It is not only the Fulani people that are under threat but we the people or the citizens living in the various communities. Because we don’t know the next target. That is why we have called all of them so that we can collectively brainstorm and get a suitable solution or lasting solution to this problem.”

The DCE described it as “a threat to national security” and must not be allowed to continue.

The Regional Minister and Chairman of the Security Council, Yidana Zakari called for unity to nip the menace in the bud.

“Kidnapping is a recent issue around this area and for now, it is restricted to only the Fulani community and we need to come together and take steps to fight this canker. It’s a worry to us, it’s a worry to the government and it’s a worry to everybody”.

“We are one people but if anybody would want to take our security for granted and behave in ways that are not approved by this country, I’m sure the very laws of the country will not allow those people to go unpunished.

I will want to send a strong signal to the kidnappers that wherever they are hiding, the Police, the Military, the BNI and all the security agencies will find them in their hideouts, and they will deal with them,” he added.

The Regional Minister also issued some directives for immediate implementation by both the District Security Council and the various local chiefs.

“All those Fulani settlers who are not known by the chiefs of the various communities, who have just come to settle on their own, they have no space to live with us. If they want to stay, they should regularize their stay, go through appropriate procedures, go through appropriate protocols in the communities, and let the chiefs know that you are here to live with them.”

According to him, “the problems we face are not perpetrated by Fulani settlers who have lived with us for ages. Those problems come as a result of those new people who just arrived and think that they are here to make money and will not respect laws.”

Mr. Yidana Zakari gave the assurance that the security agencies will leave no stone unturned to nab these individuals.

“I’m giving you the assurance that we are in talks with National Security and at the appropriate time, we will flush out all those people in the forest who have not registered, who are not known by anybody and think that the forest is their home. The might of the Police, the might of the Military and all actors of the state will deal with them”.

The Regional Police Commander, DCOP Moses Ali who also addressed the gathering, stated that his outfit will be proactive to prevent the situation from escalating.

“Currently, it’s restricted to the Fulani community but we want to be proactive. If we do not, after they have finished those wealthy Fulani people in their communities, they will descend onto our communities.”

To bolster the Service’s efforts, he urged the residents to volunteer vital information regarding the kidnappers to the Police.

“In the discharge of our duties, if these criminals dare us, we will respond with equal force if not excessive.