Man arrested for selling shea butter as cure for Covid-19 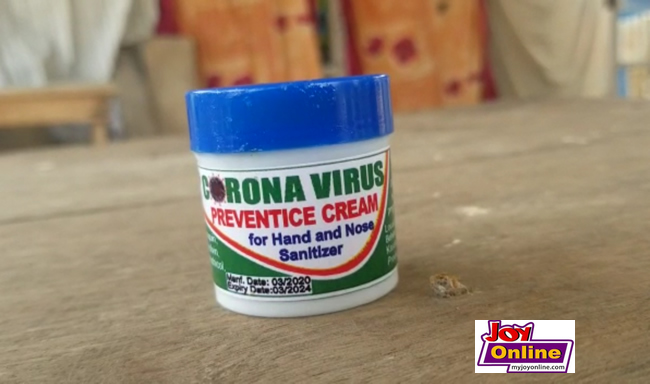 The police have arrested a 52-year-old man for allegedly selling Shea butter as a cure for Covid-19, the respiratory disease caused by coronavirus, at Awutu Breku in the Awutu Senya West District, Central region.

King David told unsuspecting customers that the shea butter cream cures the disease when applied on the body.

Some of the customers who spoke to Adom News said they were told to apply the cream, which was sold for ₵5.00 after eating as it works faster that way.

“I bought two of the bottles. He told me to apply it after eating on the ear, inside the nose and all over the body. I wanted to send one to my mother in the village,” one of the customers said.

Another person who bought one said he was told not to wash his hands after applying the cream.

“He told us to stop washing our hands and use the cream instead. But later, I realized it was just shea butter.”

The customers have gathered at the police station where David has been sent waiting to collect their monies from him.

The Awutu Bereku District Police Commander, Sup. Joshua Semanyo who confirmed the incident said they arrested David after some of the customers complained.

David, according to the Commander has a certificate to deal in herbal medicine but his assertion to have sure for Covid-19 is false.

Investigations have commenced, however, into his claims, Sup,Semanyo added.

To date, there is no known cure, vaccines or medicines for Covid-19. Scientists around the world are still working on potential treatments and vaccines for the disease but none have yet been approved.

DISCLAIMER: The Views, Comments, Opinions, Contributions and Statements made by Readers and Contributors on this platform do not necessarily represent the views or policy of Multimedia Group Limited.
Tags:
Coronavirus
Covid-19 Cure