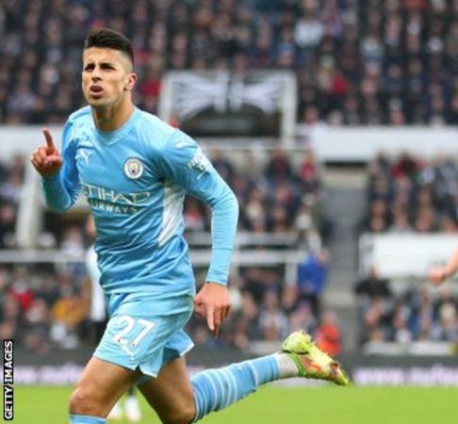 Manchester City full-back Joao Cancelo says he suffered cuts to the face after attempting to fight off a gang of robbers while with his family.

The 28-year-old posted an image of his injuries on Instagram.

“Unfortunately today I was assaulted by four cowards who hurt me and tried to hurt my family,” he wrote.

“When you show resistance, this is what happens. They managed to take all my jewellery and leave me with my face with this state.”

Cancelo has been a key part of the defending champions’ march to the top of the Premier League table, appearing in all but one of City’s games in the competition this season.

He was voted into the Professional Footballers’ Association Premier League team of the season in 2020-21, having arrived at City in a £60m deal from Juventus in August 2019.

“After so many obstacles in my life, this is just one more that I will overcome,” Cancelo added.

As an 18-year-old, the Portuguese was a passenger in a car accident that killed his mother.

Manchester City said in a statement they were “shocked and appalled”.

The club said: “Joao and his family are being supported by the Club and he is helping the police with their enquiries as they investigate this very serious matter.”