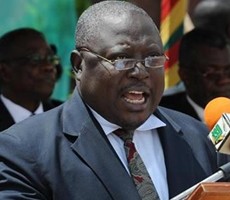 Former Attorney-General Mr Martin Amidu has issued yet another disclaimer insisting he never authorized Deputy AG, Ebo Barton Odro to write a letter to the Finance Ministry to pay some GH¢4.2 million to African Automobile Ltd.

According to the former AG’s letter to the Auditor-General, the Deputy AG, Mr Barton Odro who also the Member of Parliament for Cape Coast, on 22 September 2011 signed a letter addressed to the Finance Minister, in respect of a matter involving African Automobile Ltd., directing the Finance Minister to “authorize payment of the sum of GH¢4,159,010.38 to the plaintiff whose solicitors may be reached at…”.

But Mr Amidu has denied ever authorizing Mr Odro to sign any such letter.

Click here to read the letter Mr Amidu wrote to the Auditor-General.