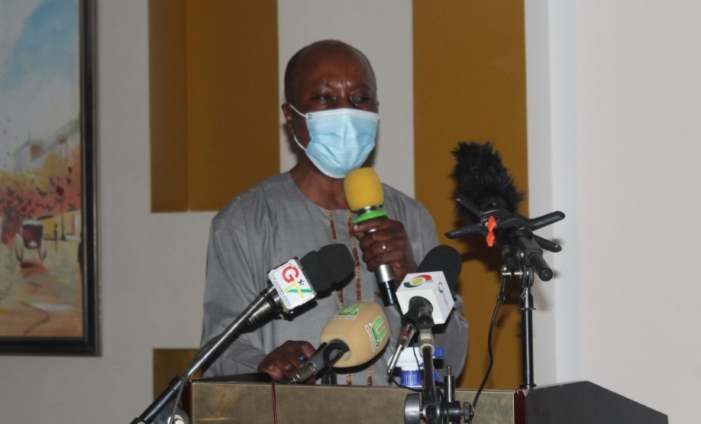 The MDAs, scheduled from 9th to 22nd August 2021, beyond the 11 endemic districts, have targeted 137 districts in all regions of Ghana except Greater Accra. About 12.6 million people are expected to take the drugs in this year’s implementation of the NTD program.

The NTD Programme Manager, Dr Kofi Asemanyi-Mensah, who launched the MDA on the theme “Face NTDs, End the Neglect through Effective and Quality MDAs”, said the implementation of the program forms part of eliminating Onchocerciasis or river blindness by the year 2025.

Ghana remains endemic to the human onchocerciasis, a disease of the skin and eye caused by Onchocerca volvulus, a parasitic worm transmitted by Simulium species (blackflies) that breed in fast-flowing rivers and streams.

Some of the infected river basins are found in the Pra, Pru, Offin, Afram, Bia, and Bui-Black Volta rivers.

Dr Kofi Asemanyi-Mensah explained that over one billion people globally suffer from one or more NTDs that cause disability, severe disfigurement, and blindness.

“These diseases affect the world’s most vulnerable population with devastating and lifelong disabilities that contribute to trapping individuals, families, and even entire communities in poverty”, he said, hence, the Health Services resolve to embark on its prevention and control, which is central to ending extreme poverty in the next two decades.

The NTD Program Manager said the approach in combating the Onchocerciasis/river blindness would be by using drugs that have been proven safe and effective, which can be delivered by trained non-health personnel to affected communities.

“This approach known as Mass Drug Administration provides a single dose medication to all eligible individuals once or twice a year”, he explained, adding, “implemented over three to seven years, the MDA can significantly control the burden of NTDs and in some cases, elimination can be achieved”.

While expressing the Health Service appreciation to all health workers, community drug distributors, and other volunteers for their continuous dedication to the elimination of the NTDs, the Program Manager, Dr. Kofi Asemanyi-Mensah, also urged stakeholders to encourage all eligible persons on the need for the drugs in the fight against Onchocerciasis and other NTDs.

He believes it will ensure the plague is purged from the affected communities to enable them to go about their normal activities.

In a speech read on her behalf, the Bono Regional Minister, Justine Owusu Banahene, said the geographical conditions and features of the hitherto Brong Ahafo Region have been conducive for the transmission of some of the NTDs including Elephantiasis, Bilharzia, and Buruli ulcer.

She noted that successive governments are fully aware of the fact that a healthy workforce is a productive labour in nation-building, hence the prioritization of health and huge allocation of resources to support the delivery of quality health care.

Owusu Banahene appealed to the media to offer their platforms for messages of the benefits of the Onchocerciasis MDA to be communicated to the citizenry.

She, however, assured that the government remains resolute in its commitment to ensuring the total eradication of the Onchocerciasis and other NTDs.

The participants at the national launch included public health directors across the country, governmental agencies including Ghana Education Service and the Information Services Department, Religious Leaders, Health Service Providers, and Partners in Health.

DISCLAIMER: The Views, Comments, Opinions, Contributions and Statements made by Readers and Contributors on this platform do not necessarily represent the views or policy of Multimedia Group Limited.
Tags:
Dr. Kofi Asemanyi-Mensah
launch
Mass Drug Administration
Onchocerciasis