Mepe Afenorto festival back with special attention on TVET after two years - MyJoyOnline.com 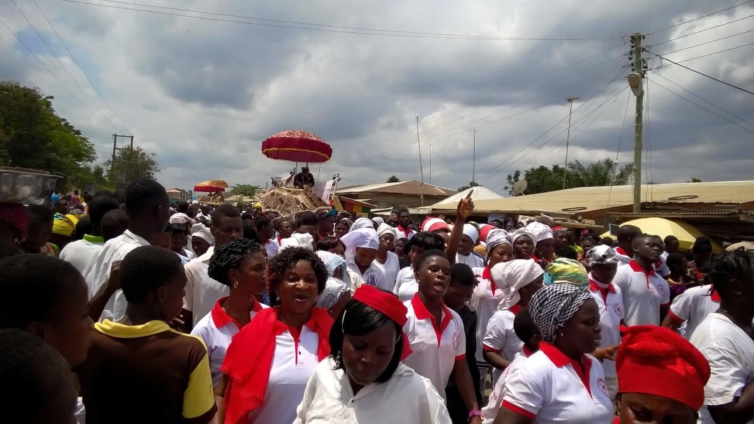 The Mepe Afenorto festival will be celebrated this year with lots of activities and display of rich culture by the Chiefs and people of Mepe Traditional Area.

The festival was stalled for two years due to the Covid-19 restrictions and other issues faced by the area.

Chairman of the Planning Committee, Mr Kojo Mawulenu Fabian noted that this year’s celebration will focus on TVET education since the district has benefited greatly from TVET which has, for many years provided employment for the youth.

Under the theme; ‘TVET education, our future; development in peace, our cultural heritage’, Mr Fabian was optimistic the theme will reflect the path taken by the traditional area to bring about development through peaceful coexistence.

Mr Kojo Mawulenu Fabian noted that, the importance of TVET cannot be overemphasized in the development of any country.

“[TVET] provides our young people with the skills that will make them employable, enhance livelihoods and create sustainable wealth and also equip people with technical and professional skills needed for socio economic and industrial development of the community and the country,” Mr Fabin said.

He stressed that, when given the needed attention, TVET will provide the youth a better future with employable skills necessary to take care of their challenges instead of depending on the central government.

The DCE for the North Tongu District, Osborn Divine Fenu hopes this year’s festival and celebrations will bring investors to the district.

Mr Fenu noted that, the North Tongu District is blessed with many natural resources that need to be exploited by investors to improve economic activities within the district and also help the youth to be financially independent.

Mr Fenu reiterated government’s commitment to making sure that developmental projects in the district are completed.

He urged natives of Mepe and the entire North Tongu District who are home and abroad to attend the festival so as to witness the rich culture of the people.

A member of the Public Relations team of the Central Planning Committee, Romeo Adzah added that there has been massive publicity about the grand festival, hence the hope that this year’s 66th celebration be better and bigger.

The President of the Republic, Nana Akufo-Addo, is the special guest of honor for this year’s Mepe Afenorto Festival .

A BRIEF HISTORY OF AFENORTO FESTIVAL

Afenorto Festival – meaning “Period of Rest at Home” Festival – is the traditional festival of the Chiefs and people of Mepe Traditional Area. It is celebrated annually to renew the sense of oneness of the people. It thus provides a unique opportunity for reunions, particularly bondage with the extended family and ancestors.

In 1874, General Sir Garnet Wolseley moved against the armies of the ambitious Ashanti Kingdom who were attacking the coastal tribes of the Gold Coast: the “Sagrenti War” (i.e. Sir Garnet War) as it came to be known. Frightened by the magnitude of their forces, the Anlos chose to align with the Ashanti. The gallant soldiers of Mepe, on the other hand, fought alongside the British colonial army for the freedom of the people of the coastline, an alliance that won most of the battles. By this exceptional valor, Anlos gave Mepe the accolade “Mepe kukuruku, tsagblatsa, nekotsoe be yewoe bi dzo wu xe” – literally meaning “kernel shells (i.e. Mepe) had proven that they could produce superior quality fire compared to that which baphia nitidia (i.e. Ashanti/Anlo coalition) could”. Baphia nitidia is a prickly tough wood well known for its burning prowess.

Mepe celebrated its battle victories by dancing to tunes of “Agbekor” war drums. This became an established tradition, with our forefathers setting a day aside (at the end of July) for the annual commemorations of what came to be known as “Agbekortu”. The period was chosen to deliberately overlap the recurrent floods caused by the yearly overspill of the Volta River. During this time, most economic activities (particularly, clam picking, fishing and farming) along the banks of the river came to a standstill. So, all citizens returned home (to Mepe) on a forced occupational holiday. “Apekpoe” (family and clan meetings) were convened to resolve differences, build bridges, and deliberate on issues of welfare, marriage and so on.

Nevertheless, there was a sudden turn of events in 1918 when an unprecedentedly high incidence and morbidity rates of “Kpata” (the great influenza) rocked the area, causing an abrupt interruption to the annual ritual for close to four decades.

A committee set up in 1951 to work on reviving the festival reported three years later the reinstating of the celebrations and recommended among other things that the “Agbekortu” and “Time-out at Home” celebrations be integrated and christened “Afenorto” Festival.

As the dynamism of culture has never been in doubt, so Afenorto underwent some transformations in substance but maintained virtually the same pattern since its outdooring in 1955.

The undying characteristics of Afenorto Festival are as follows:

             A procession of chiefs and people of Mepe Traditional Area to durbar ground amid firing of musketry, drumming and dancing. Chieftaincy and customary regalia are displayed with splendor. The order en route to durbar ground is as follows: First comes Dzagbaku division dressed in white, followed by the Adzigo clan in green; Sevie follows cladded in yellow; Gbanvie comes next in red. At the rear is Akorvie dressed in assorted colours with the emblem of cockerel embossed.

At the grand durbar, the chiefs and queen mothers sit majestically in state with their mace – their symbol of authority. The paramount chief presents the welcome address to the guest of honor – usually a government official, who in turn gives a speech in apparent response to the paramount chief.

The grand durbar ends in the afternoon with the return of the chiefs in their palanquins to their respective palaces. The ensuing days are marked by special merry making some of which are targeted at raising fund to support developmental projects in the area. State harvest, regatta, fun beach, and dances are some of the activities.

The town equally places a lot of premium on education and this is evident in the Afenorto programme featuring the annual speech and prize-giving day for all schools in the area.

After the cleansings of ancestral/ritual stools and final observance for the dead, the curtain is officially drawn on the festival. Non-residents then return to their various places of residence to patiently await the occasion to come around the following year.