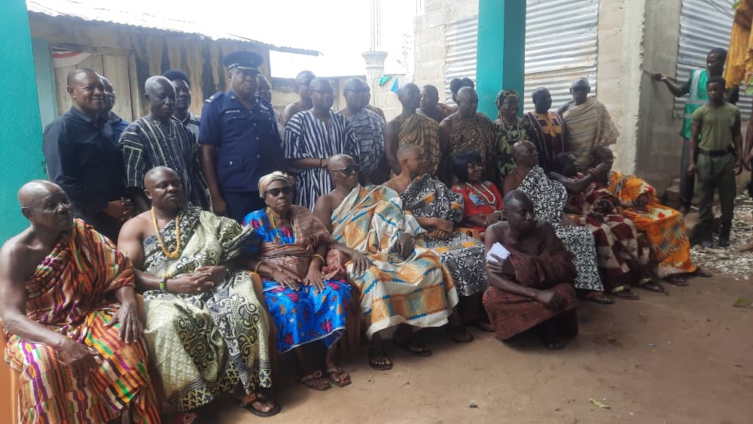 Traditional leaders from the Mepe Traditional Council in the North Tongu District of the Volta Region have advised the District Chief Executive (DCE), Osborn Divine Fenu, to quickly work on the deplorable roads in the district.

The traditional leaders, led by the Mankralo, Kwasi Nego VI, gave the advice when the DCE officially introduced himself through a courtesy call on the chiefs and queens of Mepe.

According to the  chiefs, the roads have been terrible this year due to the rains thus rendering the roads impassable and blocking access to other communities.

“The rains this year have exposed the bad nature of roads and something urgent must be done to fix it,” he said.

He noted that the roads linking the major towns have become so bad it is affecting economic activities in the district, a situation which needs urgent attention by the government.

Aside from the bad nature of the roads, other key issues discussed were security, indiscipline, education, sanitation as well as sand winning in the district.

He called for effective and efficient collaboration between the Assembly and the traditional leaders that can stimulate growth and development within the communities.

He stressed the need for closer working relations between the two parties so they could bring not only the needed development, but also peace, unity and cohesion in the district.

“We are very much aware that our county is going through hard times but notwithstanding the economic crisis and hardship, our communities still need the necessary development,“ Mankralo Kwasi Nego VI said.

The Mepe Development Association Chairman, Mr Kojo Mawuleme Fabien, who was also part of the meeting noted that there is the need for the district assembly to formulate a comprehensive human development plan to help achieve the development needs of the assembly.

The District Chief Executive, Mr. Osborn Divine Fenu, expressed gratitude to the chiefs for their warm reception and their kind words.

Mr Fenu noted that all requests raised by the Chiefs would be addressed as soon as possible.

Mr Fenu said the Akufo-Addo-led administration has the interest of the citizens at heart and is doing everything possible to make sure that issues pertaining to development are well addressed as soon as possible.

Mr Fenu reiterated government’s commitment to making sure that challenges faced by the various districts and communities are addressed in order to make things easier for residents.

He commended the chiefs for always releasing land to the Assembly for development projects and also upholding peace in their respective communities despite the pockets of chieftaincy disputes.