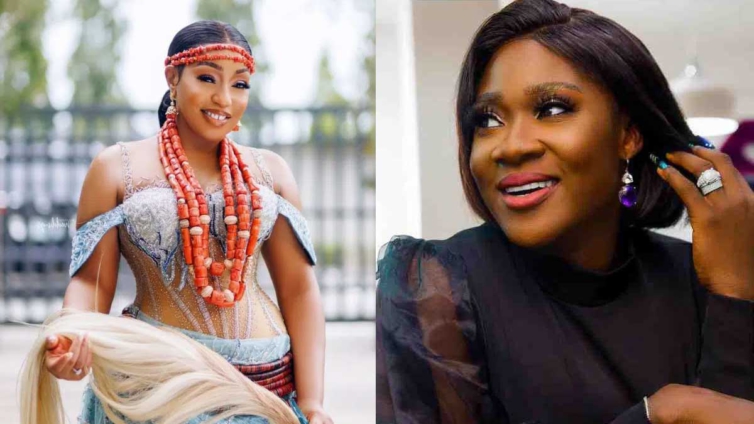 Actress Mercy Johnson faced some backlash when her absence at Rita Dominic’s traditional wedding ceremony held on Tuesday, was noticed.

A fan took to Mercy Johnson’s Instagram comment section to ask the actress why she failed to attend the event.

Mercy Johnson revealed that she was on set shooting a film. She also tagged one of her co-actors who then corroborated her story adding that they filmed till midnight.

“Lol, I was on set, my heart is always with team happy…thank you loads,” Mercy Johnson stated.

Although she failed to attend the traditional wedding, the actress celebrated Rita Dominic on her Instagram page.

She prayed that Rita be blessed with happiness as she embarks on her marital journey.

Sharing pictures of the bride on her page, Mercy Johnson wrote “the Queen herself, Congratulations Queen. The celebration never ends. I wish you so much happiness in this new journey….P/s we all clicked our glasses to you on set yesterday….God’s blessings always Mami @ritadominic ♥️.”

The traditional wedding of actress Rita Dominic and her fiancé Fidelis Anosike came off on Tuesday, April 19.

Rita Dominic, had all her friends and family from the entertainment industry gracing her traditional wedding ceremony.

DISCLAIMER: The Views, Comments, Opinions, Contributions and Statements made by Readers and Contributors on this platform do not necessarily represent the views or policy of Multimedia Group Limited.
Tags:
Mercy Johnson
Rita Dominic
weddings