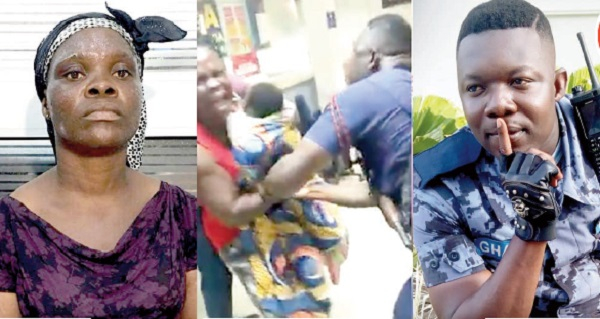 The management of Midland Savings and Loans Company Limited has compensated Patience Osafo, the lady who was assaulted by a police officer, with a brand new house and an undisclosed amount of cash, Joy News has learnt.

The worries of the woman who previously sold toffee on the streets to feed herself, her daughter and her grandchild, is now deciding what dignified trade to invest her new fortune in.

The intervention by Midland, which has been described by lawyers of the 36-year-old lady as “generous”, is to avoid a civil suit against the financial institution for the punches, trauma and embarrassment she suffered following the assault she went through at the hands of Lance Corporal Frederick Amanor Skalla.

A video of the policeman in an altercation with the woman, Patience Osafo, 36 at the Shiashie branch of Midland Savings and Loans Limited, sent outrage across social and mainstream media.

In the video, the policeman is seen using an umbrella to hit the woman, who is carrying her two-month-old baby.

The policeman then hit her with his hand and dragged her on the floor. The woman wailed bitterly while she went through her ordeal at the financial institution.

The victim had vented her frustration at the staff of the savings and loans company where she had gone to withdraw her GHS 250.00 that she had with them.

The Midland staff told Patience she could not withdraw due to network challenges.

She then asked them to allow her to withdraw just GHS 105.00 to pay her debtors and get some food for her grandchild but instead, staff the company asked the police officer to drive her out.

“Well, to avoid a civil suit against Midlands Savings and in compensation for the punches, trauma and embarrassment, we just closed a rather ‘generous’ deal that removes her from the kiosk to owning a brand new house and from the streets hawking toffee to a woman now with multiple bank accounts,” her lawyer, Samson Lardi Anyenini announced Saturday.

“Yes, her worries no longer include how to feed her family and provide healthcare for the two months old baby. Her 270-Cedis savings account now holds a substantial sum,” Samson added while reading ‘Samson’s Take’ on Newsfile on Joy News TV.

According to the host of the current affairs programme, Patience Osafo “is certainly overflowing with gratitude for the opportunity of a dignified life for herself and dependants.”

Read: Samson’s Take: Corporal Skalla is not guilty of assault!

On Thursday, the Lance Corporal Frederick Amanor, pleaded not guilty to the charge of assault when he appeared before an Accra Circuit Court.

Judge Janet Harriet Akweley Quaye, remanded him into police custody while the case has been adjourned to August 9, 2018.