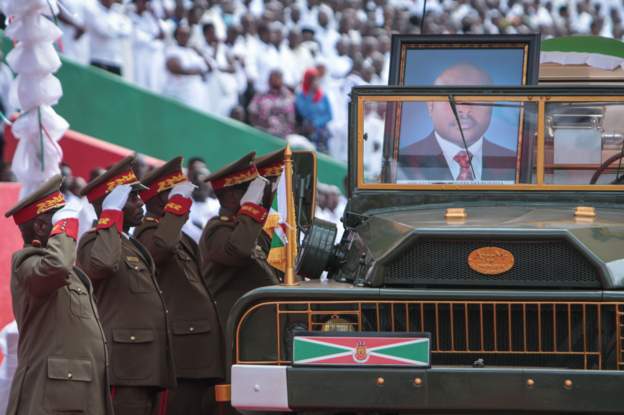 The late leader's casket is given a military salute

Mourners dressed in white have packed the stadium where the funeral of Burundi’s late leader Pierre Nkurunziza is taking place, two weeks after his sudden death.

His body was escorted under heavy security from a hospital in the central city of Karuzi, with thousands of people heeding a call to line the road towards the ceremony in the capital Gitega.

AFP news agency has photos of events there, where social distancing was not observed.

Burundi’s government said he died from a heart attack, but there is speculation he had coronavirus as his wife had been ill with the disease.

Mr Nkrunziza died shortly after an election won by Evariste Ndayishimiye, who was sworn in last week. The former president was accused of serious human rights abuses.