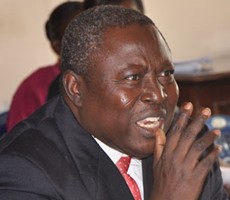 The National Union of Ghana Students (NUGS) was sad and surprised at the content of the Press Statement of the Honorable Attorney General and Minister of Justice, Mr. Martin Amidu, in which he alleged gross disrespect for his freedom of speech and an attack on his “professionalism” as the Chief Legal Advisor to the Government.

NUGS is interested in Mr. Martin Amidu’s Press Statement based on the fact that an individual’s rights and freedom must not be suppressed by those who feel the enjoyment of such rights and freedom jeopardizes the enjoyment of their whims and caprices. Like Gifty Lawson the Photo-journalist of the Daily Guide who was allegedly assaulted by the Bureau of National Investigation (BNI), when found to be true, those persons who are pursuing the Minister of State must be named, shamed, and be made to face the law.

NUGS also condemned in strong terms the alleged “threat on his life” by such persons and would want to put on record that the enjoyment of an individual’s life is a fundamental right guaranteed by the 1992 Republican Constitution of Ghana and which is not for man to control as they see fit.

However, NUGS is highly alarmed with the issue of the alleged “gargantuan crimes” committed against the state by persons in the ruling Government who are still walking as free men and women in our Ghanaian society.

The National Union of Ghana Students (NUGS) is disappointed in Mr. Martin Amidu for his lack of courage to bring out the names of the so-called persons who have committed “gargantuan crimes” against the state.

NUGS will not join in the sycophantic jamboree in praising the Hon. Minister for his boldness as some are in the habit of doing. The Minister must however know that, a man of his caliber cannot make allegations and run into hiding without substantiating them.

In view of the above¸ the National Union of Ghana Students (NUGS) is by this Statement calling on the Minister for Justice and Attorney¬-General;

• Come out with the identity of the person or persons who has/have committed “gargantuan crimes” against the State as he alleged in his Press Statement and such persons who he again alleged had official documents released to Pro-Government Newspapers from his office.

• NUGS also want to strongly call on His Excellency President Prof. John Atta Mills to as a matter of urgency institute an investigation into the alleged “gargantuan crimes” as raised by the Hon. Attorney-General in his Press Statement in order for those criminals to be arrested before they take his life. The performance of the investigation by the NDC-led-Government is apt since they tout the principles of probity and accountability and it will also tell the Ghanaians the willingness of the President to fight corruption.

• NUGS is also giving His Excellency President Prof. John Atta Mills a whooping one week to relieve the Hon. Attorney-General Mr. Martin Amidu of his position which deadline ends next week.

Anything short of the above, the National Union of Ghana Students (NUGS) would prevent the Hon. Attorney-General from getting access to his office with the strength of our numbers.

In concluding, NUGS wants to warn Government officials who doubt our capabilities and would want to assure them that we will stop at nothing in holding our National leaders accountable and this is non-negotiable.