New Nigeria Football Federation Board to take decision on Keshi 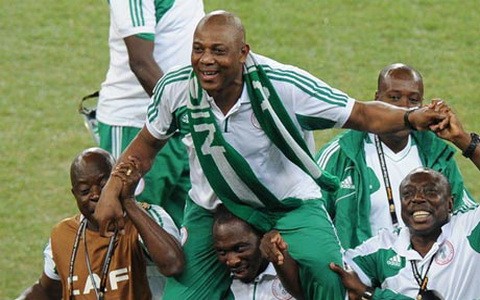 The decision to hire or fire out-of-contract Eagles coach, Stephen Okechukwu Keshi would be determined by the newly elected Board of the Nigeria Football Federation.

NFF President Melvin Amaju Pinnick said moments after his victory that the Board would as a matter of urgency take a decision on Keshi’s future with the Super Eagles.

“It’s going to be a collective decision of the Board. But what you should know is that we will work together and take decisions that will impact positively on Nigerian football. Nigeria needs the best”,he said amidst back-slapping by his admirers.

Pinnick said that the federation will focus on Super Eagles next games with Sudan before sorting out the contract issue with the coach.

Stephen Keshi’s contract expired after the World Cup and he granted interviews that he was moving ahead to consider the many offers on his table.

Surprisingly, he has continued with tinkering the Eagles on ‘pay per match’ basis until the election of a new board which happened in the oil-rich city of Warri on Tuesday.

The fate of the defending champions qualification to defend the trophy they won in South Africa has become a subject of “if” after Congo beat Nigeria in Calabar and South Africa played out a draw with the Eagles.

But Pinnick assured Nigerians that his Board would ensure that the Eagles get back to their winning ways with their remaining fixtures and qualify for the Nations Cup. “The Board will meet and take a critical look on these issues. All I am pleading for is patience from Nigerians. With the calibre of people elected to steer the ship, I am double sure that we will make Nigerians proud”, he said