NFL says players’ protests during national anthem should be allowed 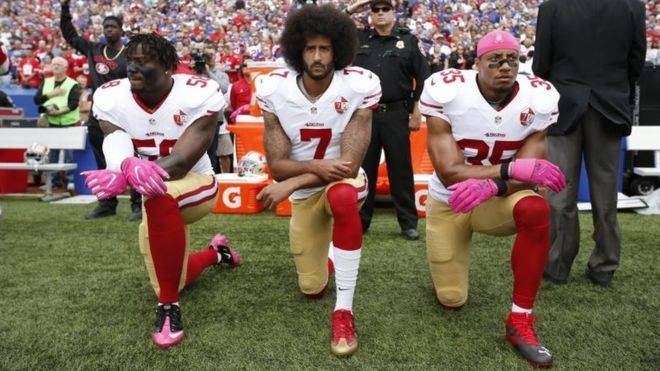 The National Football League has said players should be allowed to protest during the national anthem as rallies against racial discrimination continue.

“We were wrong for not listening to NFL players earlier and encourage all to speak out and peacefully protest,” NFL Commissioner Roger Goodell said.

The NFL had previously banned players from dropping to one knee, a practice started by Colin Kaepernick in 2016.

Meanwhile, a large protest is expected in Washington DC on Saturday.

The demonstration is the latest in a series against police brutality and racism that have been held across the US following the death of George Floyd in Minneapolis on 25 May.

Mr Floyd, an unarmed black man in handcuffs, died after a white policeman knelt on his neck for nearly nine minutes. The officer has been charged with murder while three colleagues stand accused of aiding and abetting.

What did the NFL commissioner say?

In a video, Mr Goodell denounced racism in the US in comments that came shortly after a number of players urged the NFL to take a stronger stance on racism and police brutality in the country.

“We, the National Football League, believe black lives matter. Protests around the country are emblematic of the centuries of silence, inequality and oppression of black players, coaches, fans and staff,” he said.

“I will be reaching out to players who have raised their voices and others on how we can improve.”

President Donald Trump has stridently opposed kneeling during the national anthem, and on Friday again voiced his opposition to such protests, saying on Twitter: “We should be standing up straight and tall, ideally with a salute, or a hand on heart. There are other things you can protest, but not our Great American Flag – NO KNEELING!”

Brees responded on Saturday by saying: “We must stop talking about the flag and shift our attention to the real issues of systemic racial injustice, economic oppression, police brutality, and judicial & prison reform.”

What’s the story behind Kaepernick’s kneeling?

The practice of kneeling during the customary pre-game playing of the national anthem was started by black player Colin Kaepernick in 2016 in protest against racial injustice.

A number of other players soon joined Kaepernick, who was a quarterback for the San Francisco 49ers at the time.

He became a free agent after the 2016 season and remains unsigned. Kaepernick filed a grievance against NFL owners in October 2017, believing they were conspiring not to hire him because of his kneeling protests.

The two sides resolved the grievance in February under a confidentiality agreement.

What else is happening in the US?

On Friday, the Minneapolis City Council and the Minnesota Department of Human Rights agreed to ban police neck restraints and chokeholds.

The new policy, which will be enforceable in court, requires any officer regardless of rank to verbally and physically intervene if they witness a colleague using such unauthorised force.

Meanwhile, California’s Democratic Governor Gavin Newsom said he would move to end state police training in the use of the “carotid restraint”.

San Diego police banned the technique this week. Officials in New York, San Francisco, Chicago and Los Angeles have all previously taken steps to ban or limit the use of chokeholds by members of their police departments.

Meanwhile, a federal judge in Denver has ordered police to stop the use of tear gas, plastic bullets and other non-lethal force on peaceful protesters. The order came after four protesters filed a lawsuit against aggressive police action.

In a separate development, President Trump was condemned by his Democratic challenger Joe Biden for invoking Floyd’s name in a speech to mark a surprise US jobs rebound.

DISCLAIMER: The Views, Comments, Opinions, Contributions and Statements made by Readers and Contributors on this platform do not necessarily represent the views or policy of Multimedia Group Limited.
Tags:
BlackLivesMatter
Colin Kaepernick
National Football League