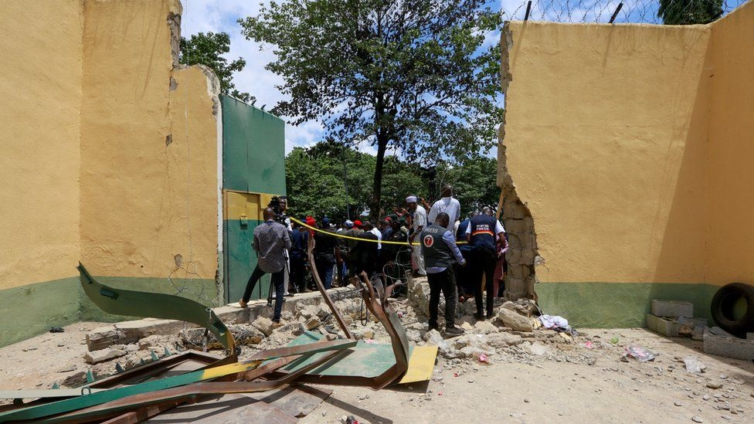 More than 400 prisoners are missing following a raid on a prison in Nigeria’s capital Abuja, officials say.

Four inmates, a security guard and several attackers were killed after the prison was targeted on Tuesday night, according to officials.

Islamist militants have said they carried out the attack, and dozens of jihadists are thought to be on the run.

More than 5,000 inmates have escaped during prison breaks in Nigeria since 2020.

Loud explosions and gunfire were heard near the Kuje medium-security prison, just outside the capital, on Tuesday night when the attack happened.

“We heard shooting on my street. We thought it was armed robbers,” a local resident told AFP news agency. “The first explosion came after the shooting. Then a second one sounded and then a third.”

As well as the four inmates killed, 16 others were also injured during the attack, Nigeria’s correctional service said.

A number of high-profile detainees, including suspected militants and jailed politicians, were in the facility at the time of the attack. But the correctional service said jailed senior officials were not among those who had escaped.

Almost 1,000 inmates were in the facility when the attack took place, according to officials. Almost all of them initially escaped but 443 have since been recaptured.

Defence Minister Bashir Magashi told reporters the attack had “mostly likely” been carried out by militant group Boko Haram and that 64 jailed jihadists had escaped from the prison.

“None of them are inside the prison, they have all escaped,” he said.

The so-called Islamic State group (IS) – which operates in West Africa under the name Iswap and is aligned with Boko Haram – has claimed responsibility for the jailbreak, stating it had “freed tens of inmates”.

Iswap broke away from Boko Haram in 2016, but sometimes some officials and locals use Boko Haram to refer to either of the two groups.

He also questioned the level of security at the prison and demanded a “comprehensive report” into the jailbreak.

The government of President Buhari is facing increasing criticism for its failure to tackle the country’s widespread insecurity with armed kidnapping gangs and militant groups unleashing violence.