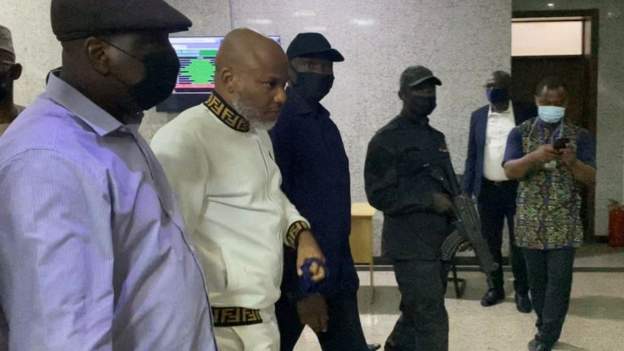 The Nigerian government has filed fresh charges that border on terrorism against separatist leader Nnamdi Kanu.

The new charges filed on Monday against the Indigenous People of Biafra (Ipob) group leader came barely 24 hours before the resumption of his trial.

Mr Kanu is due in court on Tuesday to answer to charges of treasonable felony and terrorism, which are both punishable by life imprisonment.

It is the second time the government will be amending the charges against the separatist leader.

In November, he denied the charges levelled against him by the authorities, including terrorism and treason.

He was first arrested in 2015 on charges of terrorism, treason, managing an unlawful society and publication of defamatory material.

Other charges were illegal possession of firearms and improper importation of goods.

The charges have now been increased to include making threatening broadcasts to intimidate the population and illegally importing broadcast equipment.

Mr Kanu, who holds a British passport, was brought into Nigeria last year but the government refused to disclose from which country he was repatriated.

His trial and detention has heightened tensions in the south-eastern region of Nigeria, where his separatist group has been agitating for a breakaway state.

An attempt to secede in 1967 as the Republic of Biafra triggered a three-year civil war that left more than a million people dead.