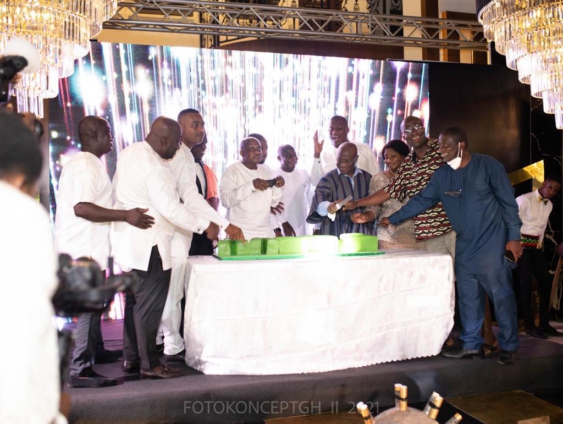 Actor, John Dumelo, has criticised the Majority Leader, Osei Kyei-Mensah-Bonsu for celebrating his 65th birthday with an E-levy cake.

The actor-turned-politician described the move as insensitive on the part of the Minister of Parliamentary Affairs.

Mr Kyei-Mensah-Bonsu together with some prominent government officials including the Vice President, Dr Mahamudu Bawumia were captured on camera cutting an E-levy cake to usher in the celebration of the plush birthday party in Kumasi.

Following the circulation of the video, a section of Ghanaians were irked by it.

Many considered it as a mockery of the calls being made by the citizenry for the government to drop the tax policy.

The Suame legislator has, however, refuted the assertion arguing that the E-levy cake was not the official pastry for his party.

According to him, the cake was brought in as a gift when the celebration was almost over.

But in response on Thursday, Mr Dumelo said that the Majority Leader should have rejected it.

“No one put a gun on your head to cut that E-levy cake. Whether it was a gift or not, you should have rejected it,” the actor wrote on Twitter which he subsequently deleted.

He further added that Mr Kyei-Mensah-Bonsu’s decision to cut the cake makes it “insensitive” to the plight of Ghanaians.

The proposed levy, which was expected to come into effect in January 2022, is a charge of 1.75% on the value of electronic transactions. It covers mobile money payments, bank transfers, merchant payments, and inward remittances. There is an exemption for transactions up to GH¢100 per day.

Explaining the government’s decision, the Finance Minister revealed that the total digital transactions for 2020 were estimated to be over ¢500 billion (about $81 billion) compared to ¢78 billion ($12.5 billion) in 2016. Thus, the need to widen the tax net to include the informal sector.