No smoke, no water, no waste. VR could train the next generation of firefighters

Australia has been devastated by its worst bushfires in decades. More than 2.3 million hectares have been burned, and around half a billion animals may have been affected. Scientists say climate change made them more intense, and a similar effect has been observed in California.

As these disasters become more frequent, firefighters are turning to new technology to help tackle them. Some fire departments in Australia and the United States have started using virtual reality (VR) to train firefighters.

Australia-based FLAIM Systems has built a VR training simulator for firefighters. Wearing a headset, trainees are immersed in real-life scenarios that can be too dangerous to reproduce in the real world.

“The whole point of VR is that we can put people in a traditionally dangerous situation, let people make decisions, and let people make mistakes,” James Mullins, founder and CEO of FLAIM Systems, told CNN Business.

The VR technology produces realistic renders of smoke, fire, water and fire-extinguishing foam in several different scenarios, such as a house fire, an aircraft fire or wildfire. 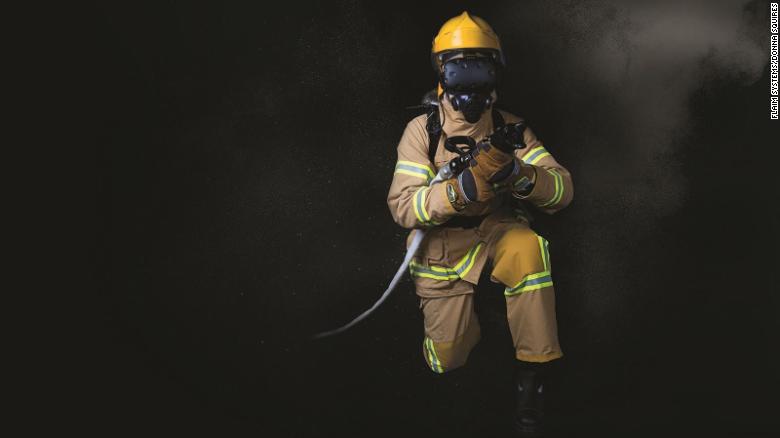 The FLAIM Systems simulator recreates the whole experience, from the visual scenario to the likely temperature

Trainees wear a heat suit that replicates the likely temperature in each scenario, controlled by software that determines the proximity and orientation to the fire and how that would affect the individual.

“We can heat a firefighter up to 100 degrees Celsius or so, roughly,” says Mullin, but only for short timeframes. He adds that they can also replicate the force felt from the hose, and simultaneously measure the heart and respiration rate of the trainee.

The company was launched in 2017 by Deakin University in Victoria, Australia, where Mullins is an associate professor. In the two years since then, it has grown from a two-man team to 18 people and now distributes to firefighting training providers in 16 countries worldwide — including Australia, the United Kingdom, Netherlands, Belgium and the United States.

In 2019, FLAIM Systems was named startup of the year by the Australian Information Industry Association, a body representing the country’s technology industry.

Last year, Australia’s Country Fire Authority (CFA) piloted the training system, and though it has yet to be approved for wider use, Greg Paterson, CFA’s deputy chief officer, told CNN Business that it could be valuable in remote areas of the country.

It could be particularly useful in a bushfire context, he adds. “The ability to provide exposure to dangerous bushfire conditions allows volunteers to immerse themselves in realistic scenarios they would not normally be exposed to during training,” says Paterson.

In October 2019, the Cosumnes Fire Department in California, teamed up with VR developers RiVR and Pico Interactive, to create its own training system for 20 new recruits. The trial was successful, and the department will continue to use VR in its training program. 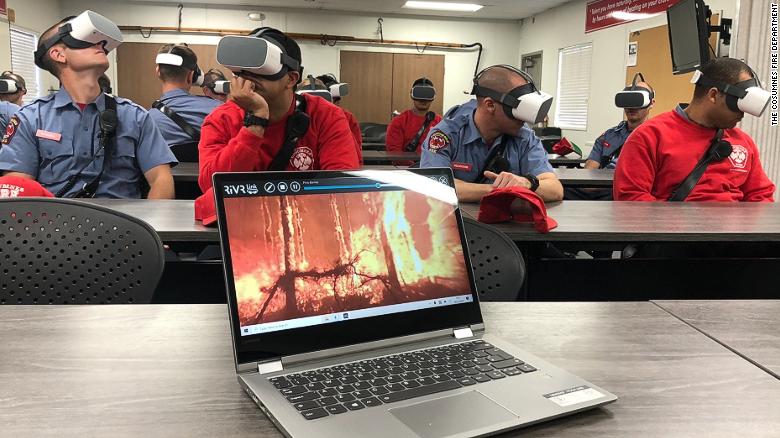 “It allows them to experience first hand the unique challenges with communication, limited visibility and come face to face with the flames in fire situations that they most certainly will encounter during their firefighting career,” said fire department captain Julie Rider.

An experienced firefighter herself, Rider said that she was impressed by how lifelike the VR scenario was.

“I could feel my heart rate climb as I looked around the room, seeing where the fire started, watching the rapid rate of fire spread,” she said. “It was amazing to experience the inherent risk, extreme danger and fire intensity without feeling any of the dangerous effects from the fire.”

It also requires a lot of water, which can be problematic in a country like Australia, where many areas suffer from severe drought conditions. 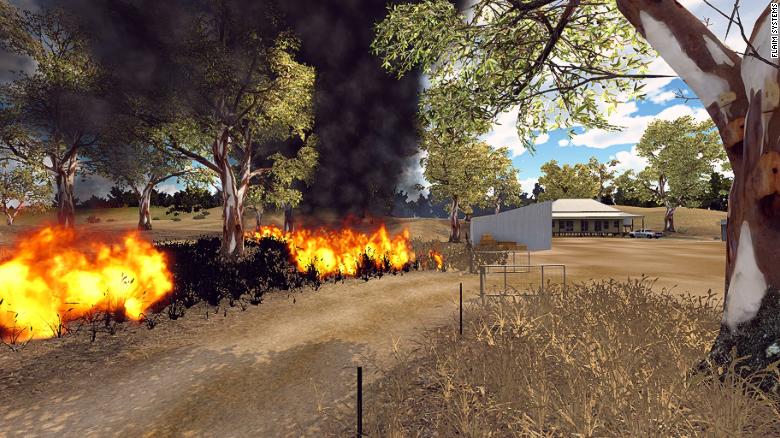 A grassfire scenario in virtual reality, created by FLAIM Systems

Chemicals from the foam typically used by firefighters can have health side effects, with the runoff contaminating surrounding soil and water. This has led some states in Australia to ban the use of this foam except in essential circumstances.

“Our technology enables people to train without discharging foam into the environment, without creating smoke, or using water,” said Mullins.