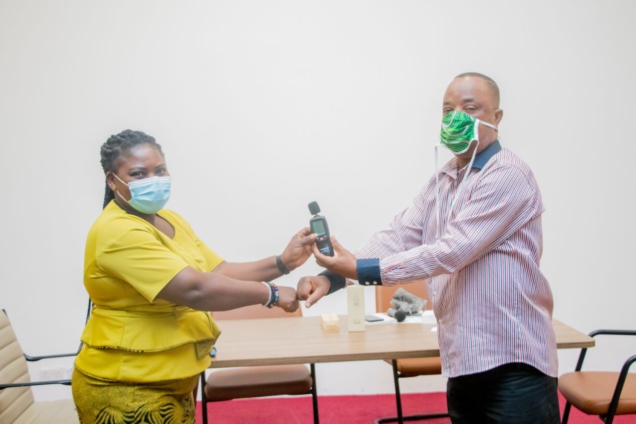 The Coordinating Director of the Accra Metropolitan Assembly (AMA), Benjamin Armah has presented three new digital Sound Level Metres (SLMs) to the Public Health Department of the assembly to assess noise levels in the city.

The devices which are featured with a wide measuring range of between 30-130 decibels are lightweight, easy to carry and has a mounting hole for tripods with large displays and intuitive interfaces to provide crucial information at a glance and in real-time.

Presenting the SLMs, the Coordinating Director observed that the issue of noise pollution was a serious concern, especially in residential areas and the Central Business District (CBD).

Hence the need to equip Environmental Health Officers with the necessary tools to enforce the permissible ambient noise for the aforementioned areas.

He added that without the device it will be difficult to measure the noise levels thus, making it difficult to enforce the by-law on noise pollution.

He was however hopeful that the new device would enable the Department to enforce the provisions in the AMA (Abatement of Noise) By-laws, 2017 effectively.

Head of Public Health Department of the Assembly, Florence Kuukyi, who received the SLMs said it had come at an opportune time and assured that the devices would be put to good use.

“In the CBD you find traders using microphones to draw the attention of passers-by, while roadside preachers also mount speakers and all these contribute to noise on our streets.

“We have drinking bars also trying to outdo one another by raising the volumes of their music, in our neighbourhoods are churches and mosques who also make a lot of noise, ” she said.