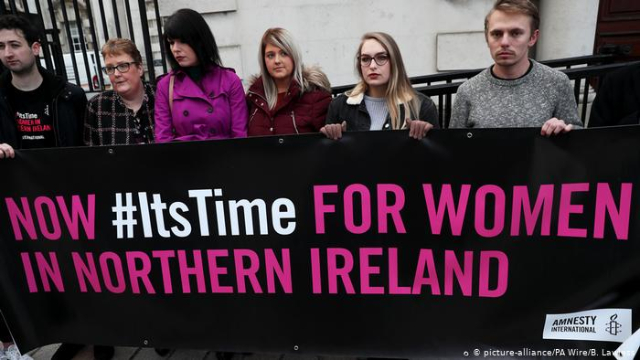 The UK region’s strict abortion law is set to change after politicians in London stepped in to legislate to end decades of discrimination against British and Irish women there. The legislation dates back to 1861.

Northern Ireland’s abortion legislation is some of the most restrictive in the world and comes from the Victorian-era of history. Pro-choice campaigners have for decades pursued legal challenges for them to be changed to respect women’s human rights.

The 1967 Abortion Act in Britain, allowing for abortion up to 24 weeks in the rest of the United Kingdom, was never extended to Northern Ireland.

At present access to abortion is only permitted if a woman’s life is at risk or there is risk to her mental or physical health that is long term or permanent. Pregnancy involving rape, incest and fatal fetal abnormality (FFA) are not circumstances in which abortions can be performed legally.

Annually a dozen or so abortions are performed legally in Northern Ireland. But the vast majority of women have to travel to Britain for an abortion, risk prosecutions by ordering abortion pills online and end their pregnancy without medical supervision, or they are compelled to continue with the pregnancy.

After the Republic of Ireland repealed its ban on abortion in 2018, Northern Ireland became the only region of Britain and Ireland with an effective ban on abortion. Women here said it was increasingly clear they were second-class citizens.

Earlier this year Westminster politicians voted in favour of an amended version of the Northern Ireland Bill to decriminalize abortion, liberalize the present law and also introduce same sex-marriage to the region.

The law changes will come into effect if the region’s legislature, Stormont, which has not convened since January 2017, fails to come together on Monday.

Civil servants in Northern Ireland, with some input from the London government, have been running Stormont departments since the two largest parties, Sinn Fein and the Democratic Unionist Party, stopped working together.

If the assembly is not restored and an executive not formed, the legislation that dates back to 1861 will be repealed on Tuesday, and it will no longer be an offence for a woman to have an abortion or for a healthcare professional to assist her.

A framework for the delivery of abortion services is set to be finalized and approved by March 2020.

The first same-sex marriages are scheduled to take place on Valentine’s Day, February 14, 2020.

After more than 1,000 days without government at least 31 of the 90 Stormont politicians are due to meet for a special sitting of the assembly on Monday to express their opposition to abortion and other matters, in a move which has been viewed as a stunt by many.

Despite it being very clear that abortion law is going to change next week anti-abortion activist and Both Lives Matter spokeswoman Dawn McAvoy from Ards, County Down, says she “hasn’t given up” and is hoping for a last-minute intervention to block the law change.

“We haven’t accepted the law will go,” she said.

McAvoy claims the intervention by politicians at Westminster disrespects democracy, devolution and the people of Northern Ireland.

She does not believe “the termination of another human beings life should ever be based on choice alone.”

“Every human being has inherent dignity value and worth regardless of health and ability or circumstances of conception,” she said. “The ending of that human life is a tragedy we want to speak up against and enable women to chose life for their unborn child.”

‘Purpose to the pain’

On the other side of this emotive debate is pro-choice campaigner Ashleigh Topley from Portadown, County Armagh, who is currently on maternity leave from her job as a human resources officer, following the birth of her now 4-month-old daughter Harper. She also is a mother to a 3-year-old girl, Robyn.

“I am beyond relieved that they will have the choice I didn’t have, should they ever need that choice,” Topley said.

Topley views the abortion law change in Northern Ireland as “catching up with our neighbours in the rest of the UK and Ireland,” and finally not being “left behind any longer.”

In 2013, at the 20-week scan of her pregnancy, Topley was told her baby would not survive outside the womb.

“Being denied a termination and then being forced to endure 15 weeks of willing my much-wanted daughter’s heart to stop and waiting for the pregnancy to end naturally can only be described as torture,” she said.

Her daughter Katy was stillborn in May 2014.

“When I was denied an abortion I swore that I would add my voice and feet to the campaign so that no one would ever have to go through what I did,” she said. “To be at the point where this is becoming a reality is just incredible.

“Decriminalization of abortion now will never undo my experience, but I feel like there has been a purpose for all the pain I endured, and that is very healing.”