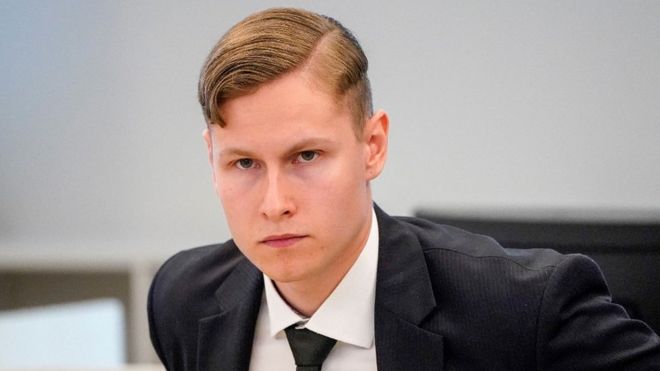 A Norwegian court has sentenced a gunman to 21 years in prison – with a minimum term of 14 years – for killing his teenage step-sister and opening fire at a mosque.

Several shots were fired in the mosque but nobody was seriously hurt. Manshaus was overpowered before police arrived.

It was treated as an act of far-right racist terror.

Police found evidence that Manshaus was inspired by Brenton Tarrant, accused of deadly attacks on two mosques in the New Zealand city of Christchurch in March 2019. Tarrant has pleaded guilty to 51 charges of murder in New Zealand.

Manshaus was heavily armed when he stormed into the mosque last August, but he was overpowered by a 65-year-old retired Pakistani air force officer, Mohammad Rafiq. He pinned Manshaus down and managed to disarm him.

Shortly after the attack, the body of the gunman’s 17-year-old Chinese-born stepsister Johanne Zhangjia Ihle-Hansen was found at a house in Baerum.

The verdict read out by judge Annika Lindstroem said Manshaus had visited neo-Nazi websites including pages calling for a “race-based” civil war.

She said he went into the mosque “with the purpose of killing as many Muslims as possible”.

In court Manshaus was unrepentant and voiced admiration for the Christchurch killer, who filmed and broadcast the mosque shootings live.

Manshaus himself wore a helmet camera and filmed his mosque shooting, but failed to broadcast the attack online.

In court Manshaus also cited Adolf Hitler and Breivik as role models, spoke of a so-called “genocide of the European people” and called the Holocaust a myth.

And on 7 May he used an “OK” hand gesture used by far-right extremists.

He had black eyes and bruises on his face and neck when he first appeared in court last year, after being overpowered in the mosque. Norwegian broadcaster NRK says he used his father’s rifle and a shotgun in the attack.

The court rejected the defence’s argument that Manshaus was mentally unfit to stand trial.

Alongside the prison sentence, Manshaus was ordered to pay compensation to the victims’ relatives and legal fees of 100,000 krone (£16,800).