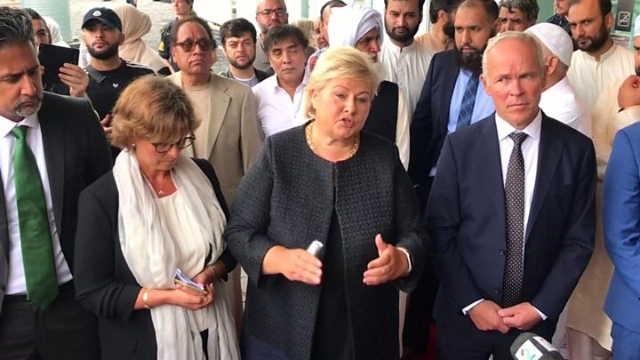 A shooting at a mosque in Norway is being investigated as a possible act of terrorism, police say.

A gunman opened fire on the Al-Noor Islamic Centre, on the outskirts of the capital Oslo, on Saturday.

One person in the mosque managed to overpower the gunman and was injured in the process. The suspect was arrested after the attack.

Police also charged the suspect with murder after his 17-year-old stepsister was found dead in a separate location.

Acting chief of the police operation Rune Skjold said that the suspect, described as a white male, had been known to police before the incident but could not be described as someone with a “criminal background”.

Mr Skjold said that the man appeared to hold “far-right” and “anti-immigrant” views and had expressed sympathy for Vidkun Quisling, the leader of Norway’s collaborationist government during the Nazi occupation.

The suspect appears to have acted on his own.

Only three people were inside the mosque at the time of the attack.

Mohammad Rafiq, 65, was one of the first men to approach the attacker.

He told Reuters news agency: “I suddenly heard shouting from outside. He started to fire towards the two other men.”

Mr Rafiq added that he then grabbed the attacker, holding him down and wrestling the weapons off the attacker.

Mr Mushtaq called on the government to take action to protect the Muslim population.

“For so many years, the secret police says the Muslims are the biggest risk for this country, but if you look at those last two major incidents of terrorist activities, it’s not Muslims who have done this.”

The mosque had previously implemented extra security measures after a gunman killed 51 people at two mosques in Christchurch, New Zealand earlier this year.

DISCLAIMER: The Views, Comments, Opinions, Contributions and Statements made by Readers and Contributors on this platform do not necessarily represent the views or policy of Multimedia Group Limited.
Tags:
Norway
Terrorism