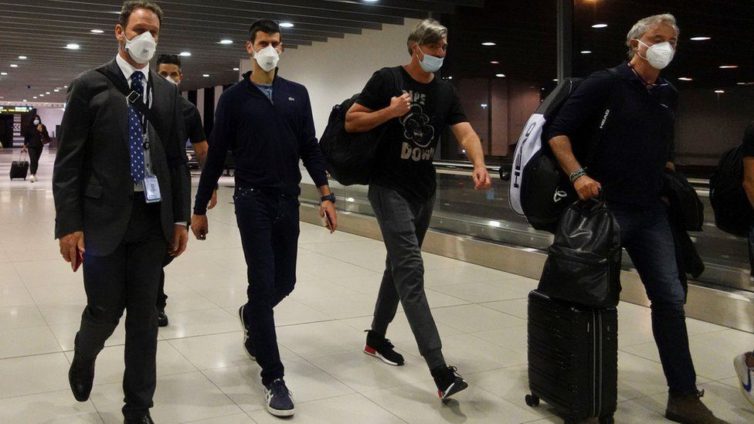 Novak Djokovic has been deported from Australia after losing a last-ditch court bid to stay in the country.

Judges rejected a challenge launched by the unvaccinated tennis star after the government cancelled his visa on “health and good order” grounds.

The world number one’s hopes of defending his Australian Open title and winning a record 21st Grand Slam in Melbourne are over.

Djokovic said he was “extremely disappointed” but accepted the ruling.

He boarded a flight bound for Dubai from Melbourne airport.

As he prepared to leave, the men’s tennis governing body ATP said the court ruling on Sunday marked an end to a “deeply regrettable series of events”.

Earlier in the day, Djokovic’s supporters fell silent outside the courtroom as the decision was announced on the eve of his opening match in the tournament. One fan told the BBC that her summer would be “empty” without the 34-year-old playing at the Open.

Djokovic launched the case after Immigration Minister Alex Hawke used his ministerial powers to cancel the Serbian player’s visa, arguing that his presence in the country risked fanning anti-vaccine sentiment.

It was the second time his visa had been revoked, after a first cancellation over not following Covid entry rules was overturned by a different judge.

During Sunday’s court hearing before a three-judge panel, Djokovic’s defence unsuccessfully argued that the grounds given by the government were “invalid and illogical”.

Chief Justice James Allsop said the federal court’s ruling was based on the legality of the minister’s decision, not on whether it was the right decision to make.

Full reasoning for the ruling will be made public in the coming days, he said.

Deportation orders usually include a three-year ban on returning to Australia, though this can be waived in certain circumstances.

Sunday’s ruling marks the end of a 10-day saga over Djokovic’s Australian visa.

There has been much public anger in Australia over the player’s attempt to enter the country unvaccinated. The federal government has repeatedly said people must comply with the strict laws in place to deal with the pandemic, and that no-one is “above the law”.

Djokovic was originally granted a medical exemption to enter Australia by two different independent health panels – one commissioned by Tennis Australia, the other by the state government of Victoria – after testing positive for coronavirus in mid-December.

However, the Australian Border Force detained him on 5 January for not meeting federal coronavirus requirements, and his visa was revoked.

A judge later overturned that decision, but the government stepped in last Friday to revoke the visa again, saying doing so was in the public interest.

Although Djokovic is not vaccinated against Covid-19, he has not actively promoted anti-vax disinformation. However, Australian anti-vaxxers have been using the hashtag #IStandWithDjokovic on social media.

The visa battle is also at the centre of a political row in the country.

In his statement on Sunday, Mr Morrison said the government was “prepared to take the decisions and actions necessary to protect the integrity of our borders”.

But Australian opposition politician Kristina Keneally said Mr Morrison had made himself a “laughing stock” by mishandling the Djokovic case, as she questioned why the unvaccinated player was granted a visa in the first place.

“He [Djokovic] came to Australia with a medical exemption proposal and then you were mistreating him for 10 days. Why did you do it? Doing a witch hunt against him? This is something that no one can understand,” he said.

British tennis star Andy Murray, who has known Djokovic since they were children and competed against him for the sport’s biggest prizes, said the situation was “not good” for anyone.

“It feels everything here happened extremely last minute and that’s why it became such a mess,” he told the BBC.

Djokovic on Sunday said he was “uncomfortable” with the focus placed on him as a result of the the visa row, adding: “I hope that we can all now focus on the game and tournament I love.”

Italy’s Salvatore Caruso, ranked 150th in the world, is the “lucky loser” who will now replace Djokovic in his match against Serbia’s Miomir Kecmanovic on Monday.