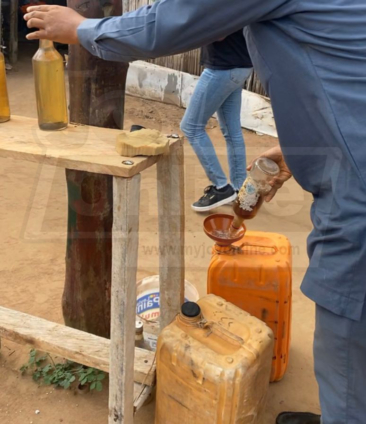 The Volta Regional branch of the National Petroleum Authority (NPA) has confiscated some petroleum products believed to be smuggled into the country.

The swoop was carried out by NPA Volta Regional office in collaboration with the Intelligence department in Accra, Wudoaba and Aflao in both Ketu South and North Municipalities.

According to the Regional Director, Mr Rasheed Dauda, it was necessary to take up action due to their investigations and the recalcitrant behaviors of the alleged smugglers in the two municipalities.

The military was also invited to give the officials of NPA protection.

Mr. Dauda noted that the illegal sale of petroleum products in the areas is unacceptable with most of them not wholesome and bad for the consumer market.

He further explained that the swoop will be a nationwide exercise and they will continue until the illegal activities are reduced and the culprits brought to book.

He said that over hundred unwholesome products in jerry cans and other petroleum products were confiscated and sent to the NAP Tanker Park for further investigations.

“Texts carried out on the products confiscated shows that they are not wholesome sale to consumers and so have been taken to the Tankar park of the National Petroleum Authority for further investigations,” Mr Dauda said.

Mr Dauda said one person has been arrested and is currently in the custody of the Afalo Police station helping with investigations to get the rest of the other suspects.

The Regional Director said the aim of the swoops across the country is to make sure that all smuggled products do not find their way to unsuspecting consumers.

He explained that the high standard of the country’s petroleum products makes it easy for them to distinguish between our products and that of the neighbouring countries.

“Because we have petroleum products of a higher standard in Ghana, it easy for us to text products from unapproved places and compare them to what we have in Ghana and know if they are really of good standards or not, “ Mr Dauda said.

Mr Dauda, however, advised consumers of petroleum products to always make sure that it from the right and NPA-approved outlets.

Meanwhile, the Chief Executive Officer of the NPA, Dr Mustapha Abdul-Hamid, who visited the Upper East, West, Northern and Ashanti regions on a working visit said issues such as fuel smuggling at the border towns, particularly Wedana community, selling of adulterated fuels as well as filling stations operating with expired licenses and working without safety standards are not acceptable and must stop.

DISCLAIMER: The Views, Comments, Opinions, Contributions and Statements made by Readers and Contributors on this platform do not necessarily represent the views or policy of Multimedia Group Limited.
Tags:
National Petroleum Authority (NPA)
Petroleum smuggle