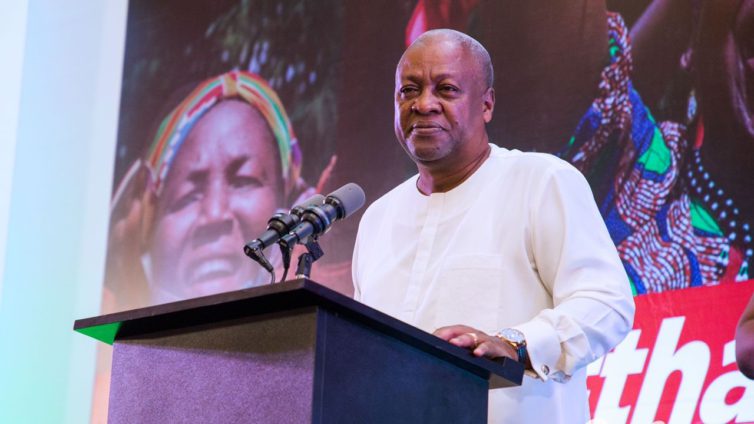 Former President John Mahama says he shares in the concerns of economic hardship being complained about by Ghanaians.

According to him, the current state of affairs is unimpressive as the Akufo-Addo administration nears the end of the first year since his mandate was renewed as President in the 2020 elections.

Speaking in Accra to climax his 2-day ‘Thank You’ tour of the Greater Accra Region, Mr. Mahama described the government’s handling of citizens’ wellbeing as a ‘common national tragedy’.

“Ladies and gentlemen, civil servants, doctors, nurses, teachers, businessmen and women, traders, farmers, drivers, and the teeming unemployed youth of Ghana, this government is our common national tragedy. We may yet have to endure these very difficult times for a while more due to a combination of factors,” he said on Wednesday, November 10,

He, however, urged the gathering not to fret nor lose hope just yet.

Mr Mahama urged Ghanaians to repose confidence in the opposition National Democratic Congress (NDC) in the 2024 elections in a bid to alleviate the hardship he says has been caused by the current government.

“I am talking about a future where your name, your ethnicity, your tribe, your circumstances of birth will not determine how you are treated in your own country by your own government. I recall the words of the Most Reverend Japhet Yao Ledo during my thank you tour of the Volta Region, and I stand this evening to assure the people of the region and the nation at large that all successive NDC administrations will continue to be national and people-centered ones, sharing the national cake, equally and beneficially to all regions and parts of the country.”

The 2020 NDC Presidential Candidate further criticised the Akufo-Addo government for being unwilling to listen to the concerns of the people amidst the dire economic situation.

He observed that these actions and inactions of the government have been detrimental to the country’s development.

“The most pressing problem is the impact of the ailing economy on livelihoods, prospects and dreams. The consequences of misguided priorities in economic management have led to unbearable hardship, high unemployment and the frustration and despair felt by millions of the youth,” he added.

DISCLAIMER: The Views, Comments, Opinions, Contributions and Statements made by Readers and Contributors on this platform do not necessarily represent the views or policy of Multimedia Group Limited.
Tags:
Greater Accra Region
John Mahama
NPP
Thank you tour
Tragedy