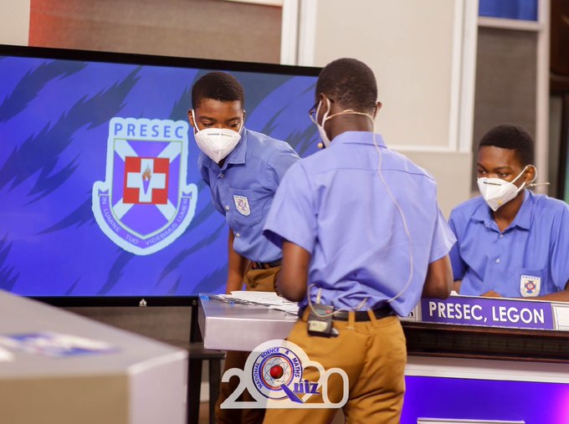 Presbyterian Boys’ SHS has eliminated Ghana National College and Koforidua Sec. Tech in the quarter-final stage of the National Science and Maths Quiz (NSMQ) to progress to the next stage of the competition.

The last contest in the one-fourth stage of the competition proved to be an intriguing and heart-racing kind as the five-time champion Presec, Legon that are on a 6th trophy quest faced Ghana National College and Koforidua Sec. Tech. School.

On Sunday, contestants’ Benjamin Quansah and Gakpetor Daniel of Presec Legon rocketed their school to the semi-final stage of the race.

In round 1 of the contest, Ghana National College swiftly grabbed the lead position with 29 points.

But proving to be a fierce contender, “The Boys in Blue” secured 27 points on the scoreboard.

Koforidua Sec. Tech. School managed to earn 17 points at the end of the first round.

That was a very “speedy” Round 2, wouldn’t you agree?

Presec, Legon seized the baton and led the speed race in round 2 with 31 points.

Koforidua Sec. Tech. School found its way in this round with 25 points.

Problem of the Day scores scores

All three schools found it challenging to get their heads around the Problem of the day in round 3.

Presec, Legon and Koforidua Sec. Tech. School secured 1 point at the end of the round.

Unfortunately, the Cape Coast-based school was unable to amass points to their tally.

With 45 points, Presec Legon led the pack in round 4. A three-point margin landed Ghana National College at 42 points.

Answering the first two riddles in round 5, the “Ɔdadeɛ”‬ boys of Presec, Legon scored 51 points and eliminated its contending schools from the race.

Though Koforidua Sec. Tech School picked up the pace in the last round, their best was not enough.

DISCLAIMER: The Views, Comments, Opinions, Contributions and Statements made by Readers and Contributors on this platform do not necessarily represent the views or policy of Multimedia Group Limited.
Tags:
Ghana National College
NSMQ 2020
Presbyterian Boys SHS