NSMQ 2021: You've made us proud, but we want the ultimate prize - Volta Regional Minister to Ketasco - MyJoyOnline.com

NSMQ 2021: You’ve made us proud, but we want the ultimate prize – Volta Regional Minister to Ketasco 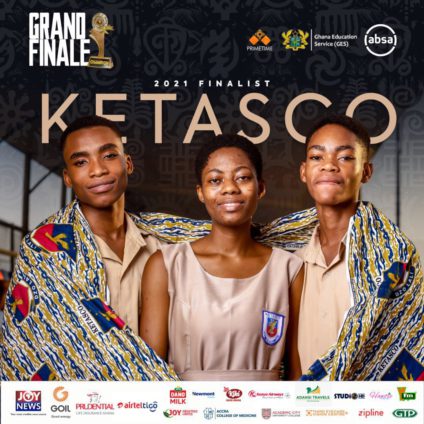 According to the minister, Ketasco has made the region proud as well as placed it on a great pedestal due to its phenomenal performance in the ongoing contest. However, all efforts must be pushed towards winning the ultimate prize.

He made this known while interacting with the team through a Zoom meeting, ahead of the finals to take place today, Friday.

In response, a spokesperson for the team assured the Regional Minister of victory, adding that “from here, we are coming straight to the Regional office to hand over the trophy to you.”

The team expressed gratitude to Dr Yao Letsa for the support he has lent to the school throughout the entire competition.

“We are most grateful for your words of encouragement and the support that you have provided for the team since we won the regional championship throughout the period we were going for our trial contests. We are extremely grateful to you.”

While interacting with the contestants, the Volta Regional Minister bemoaned his inability to be in Kumasi to support Keta SHS due to the 2021 Volta Fair.

However, he noted that the Regional Director of Education, Keta MCE, among others will be at the Kwame Nkrumah University of Science and Technology on behalf of the entire region.

Dr Yao Letsa concluded his message by praying for wisdom and strength on behalf of the team to ensure they emerge victorious. He also promised to lead the team to pay a courtesy visit and present the trophy to President Akufo-Addo.

“I am calling to wish you all the best and to encourage you that you will make it. You will make Volta proud. We pray that the Almighty God will give you wisdom to be able to make Volta Region proud. We are expecting the trophy and I will take you to His Excellency the President to present the trophy to him.

“You will not let us down. I know God will strengthen you so you make us proud,” he said.

A closing ceremony scheduled for 2 pm will precede the main event to determine who carries the trophy and earns the bragging rights as 2021 NSMQ champions. This will be aired on JoyNews and Myjoyonline.com.

The school that would win this year’s National Science and Maths Quiz (NSMQ) walks away with a grand prize of GH₵80,000 in addition to an Excellence Award of GH₵40,000 by Absa Bank.

Meanwhile, contestants for the three schools scheduled to compete in this year’s National Science and Maths Quiz finals have vowed to deliver another action-packed contest.

The defending champions are currently riding on the mantra, ‘we are seven a living God’ which demonstrates their readiness to grab the coveted prize back-to-back in their cabinet. They have revealed that their colleague, Henry Otumfuo, who took ill at the semi-final stage contest is currently in good shape.

The Ketasco contestants say they believe in the “God of ONE-ders” to deliver a historic victory but Prempeh College say they are hopeful of keeping the trophy in the Ashanti region “to Glory-FIVE the Lord.”

These puns have been employed by the school to register their zeal for victory.