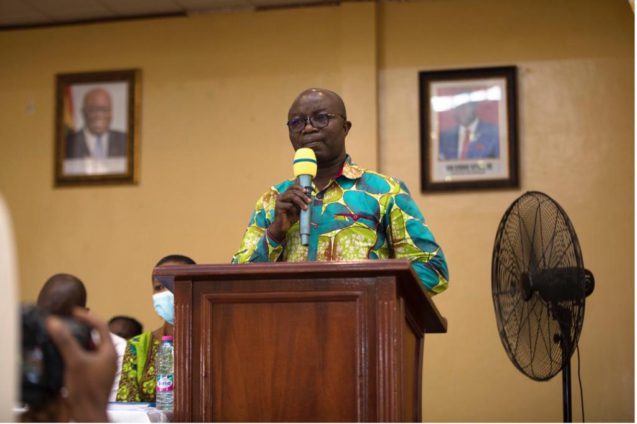 The focus of the National Service Scheme (NSS) is to become an employable agency that will create job opportunities for the youth in the country, the Executive Director of the Scheme, Osei Assibey Antwi, has said.

He said it is the avowed aim of the current management of the Scheme to roll out more innovative programmes to ensure that more service personnel will be in gainful and viable employment after their service.

He noted that the programmes would equip service persons with the requisite skills to create their own enterprises after their service each year.

Mr Assibey Antwi said the new focus of the NSS emanated from the fact that statistics showed a rather staggering number of Service Personnel add up to the unemployed numbers each year.

“Per our records, only 24 per cent of National Service Personnel reliably find jobs, while a whole 76 per cent end up jobless at the end of each service year, so we are using these programmes to work on the numbers to turn the figures around”.

He made this known when delivering a speech at the 2021/22 La Dade-Kotopon Municipality National Service Personnel Association (NASPA) elections and orientation at the Burma Camp in Greater Accra.

According to him, the newly introduced initiatives include the Pathways to Sustainable Employment (PaSE) Project Ghana Tech Lab (GTL), which is currently training 600 service personnel in mobile apps and website building skills.

There is also the Venture Building Program (NSS and University of Professional Studies, Accra (UPSA), which is grooming 91 Service Personnel with entrepreneurship skills throughout the service year and GNSS/Ghana Export Promotion Authority, which is training 63 personnel in entrepreneurship and other skills requires to create products and services which can be exported outside Ghana.

There is also the Stanbic Graduate Transition Support Program (GTSP), which is currently providing a sustainable financial support system for National Service Personnel in financial literacy and business development.

The Scheme also has the NSS-GTA Support program, which has currently deployed 677 personnel to support tourism development in the country.

There is also the Youth in Greenhouse Enterprise Project, training National service personnel in the agri-business field and the NSS Construction and Housing Project, which is training Personnel to embark on the construction of real estate housing.

According to Mr Antwi, the initiatives currently running as pilot programmes would be run as fully operational modules with an increased number of personnel intakes by the beginning of the next service year.

“For example, the PaSE project, which is currently training 600 personnel in the development of mobile applications and websites, will be expanded to train 20,000 personnel by the beginning of next service year,” he explained.

He said the programs were created based on careful and in-depth research on the current industry demands that require a skillset to propel growth and optimum income.

“All these programs have been introduced to solve problems; we didn’t just create them, but we did research and found the problems, and we are providing the solutions”, he emphasized.

“You are all ambassadors of the Scheme, and as such, you have a big responsibility to be respectful to authorities, be time conscious and hardworking because it is only by these traits that you can be recommended to businesses and at the same time project and protect the good name of National Service Scheme” he further stressed”.

DISCLAIMER: The Views, Comments, Opinions, Contributions and Statements made by Readers and Contributors on this platform do not necessarily represent the views or policy of Multimedia Group Limited.
Tags:
Employable Agency
National Service Secretariat