The chairman of the opposition National Democratic Congress (NDC), Mr Samuel Ofosu Ampofo is to appear in court on Tuesday to answer charges on conspiracy to cause harm and assault against a public officer.

To appear alongside Mr Ofosu Ampofo is Kwaku Boahen, Deputy National Communications Officer of the NDC, who is to face similar charges.

The two NDC bigshots are to appear before the Accra High Court.

They have both denied the charges against them.

The charges were levelled against the two after they reported themselves in March 2019 to answer questions concerning a leaked tape in which they are said to have made certain statements inciting violence.

Mr Ofosu Ampofo has refused to publicly comment on the audio which he has said was doctored.

When he visited the CID headquarters on Monday, March 4, 2019, about 30 minutes of the audio was played for him to listen after which he was asked whether that was his voice but he refused to comment on the audio.

He was formally arrested and was charged accordingly with a threat of harm, conspiracy to harm a public officer and proceeded to write his statement.

He has been reporting to the CID intermittently since then.

Meanwhile, the NDC through its Director of Communications, Kakra Essamuah, has issued a press release  dated April 15, 2019, announcing "for the information of the general public that" Mr Ofosu Ampofo and Kwaku Boahen would be in court on Tuesday at 8am to answer "charges arising out of the contents of the leaked tape." 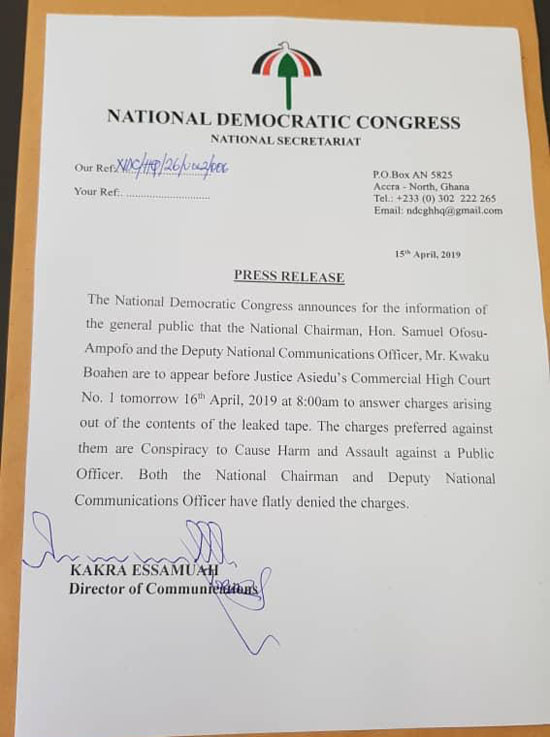