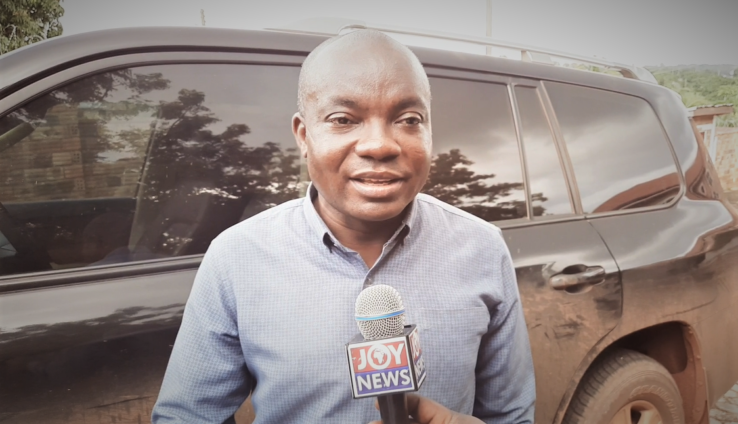 The Chief Executive Officer of the Middle Belt Development Authority (MBDA), Joe Danquah, has inaugurated various projects and inspected other ongoing projects in the Jaman North and Wenchi districts in the Bono Region.

The health, educational, markets, sanitation, and sports projects are being funded by the government’s “One Constituency, One Million Dollars,” initiative and spearheaded by the MBDA.

Inaugurated projects in the Jaman North district are; a six-unit classroom block and office for Sampa Presbyterian Primary school at GHC425,500, Asiri Health Center with three-bedroom accommodation apartments at GHC1,010,000, and a 64-unit market shed at Goka at GHC427,000.

The rest in the Wenchi Municipality are; a 16-seater toilet facility at Tromeso at GHC256,500, a 6-unit classroom block for Amponsahkrom Methodist Primary school at GHC427,500, a 3 unit classroom blocks each for Abotereye DA JHS, Branam MA JHS, Nchiraa RC, and Asoufri at GHC237,500 each.

Joe Danquah, the CEO of MBDA, explained to JoyNews that the Authority engaged stakeholders, including the assemblies and the communities to benefit from the projects so as to ensure they are not duplicated by other agencies in line with the government development agenda.

“We have collected all the medium development plans from the assemblies, development agencies, and listened to the opinion leaders, including chiefs and Members of Parliament to sort out what they need and ensure projects are also within the national development agenda”, he said.

He averred that the Authority could have just listed their projects, both completed and ongoing, and published them, but because of their critics, they preferred an open inspection involving the media.

“We have gone round, and the media has seen what we have done, and our expectation is that the media will talk for us. Additionally, I think as an Authority we have not touted our achievements to the Ghanaian public, and people think we have not achieved anything. But in all the constituencies, we have projects. Going forward, the strategy will be to show the media what we have done so they will tell the stories”.

He also agreed the MBDA Information dissemination is on the lower and will henceforth engage the media more to mirror their projects to the general populace.

While urging the stakeholders to take post-management issues seriously, he said it would serve the larger interest if proper maintenance culture is adhered to.

At Asiri, the nurse in charge, Nicholas AduAdjei, said the old facility attends to over 50 patients per day, but, due to the unavailability of wards, unlike the new one, they are unable to detain critical cases for further observation.

“We thank the government for the facility, which will help us to provide proper health care for members of the farming community, especially pregnant women and malaria cases”, he expressed.

He also said the new facility comes with three-bedroom apartments to ease the accommodation challenges of staff.

“Staff members will now live within the facility and could be called upon at night to assist in rendering emergency services for patients”, he said.

Nicholas AduAdjei, however, appealed for more beds to support the health center.

At Sampa, where a 6-unit classroom block was inaugurated, a pupil, Jennifer AkuaNyini said they are now free from weed smokers who always mess up their old dilapidated classroom since the new block has all classrooms locked.

She also said they now have a conducive environment for teaching and learning.

The headmistress, Gloria Sasah, thanked the Authority for coming to their aid and also appealed for classroom furniture and electricity to enhance teaching and learning. They also appealed for the schools to be fenced to wade off intruders.

A resident of Tromeso in the Wenchi Municipality, KwasiAgyei, said the toilet facility is important to the community since it will improve their sanitation conditions.

The CEO of MBDA, Joe Danquah, also inspected ongoing projects, including a CHPS compound at Ponkor in the Jaman North District, an astroturf at Faaman, and a health center with two bedrooms detached bungalow at Japekrom, all in the Jaman South District.

He expressed satisfaction with the projects but said recalcitrant contractors, who have vacated from the project sites would have their contracts abrogated if they fail to return in two weeks after serving them warning letters.

He further said the Authority would mount pressure on the contractors on-site to ensure projects are completed within the stipulated time.

The Middle Belt Development Authority, established in 2017 exercises its mandate in 109 constituencies in five regions; Ashanti, Bono East, Ahafo, Bono, and Eastern, and it is the main vehicle for spearheading the development of these regions under the Infrastructure for Poverty Eradication Projects (IPEP).

DISCLAIMER: The Views, Comments, Opinions, Contributions and Statements made by Readers and Contributors on this platform do not necessarily represent the views or policy of Multimedia Group Limited.
Tags:
Jaman North
Joe Danquah
Middle Belt Development Authority
Wenchi districts