Pakistan floods: ‘It’s like fighting a war with no end’ 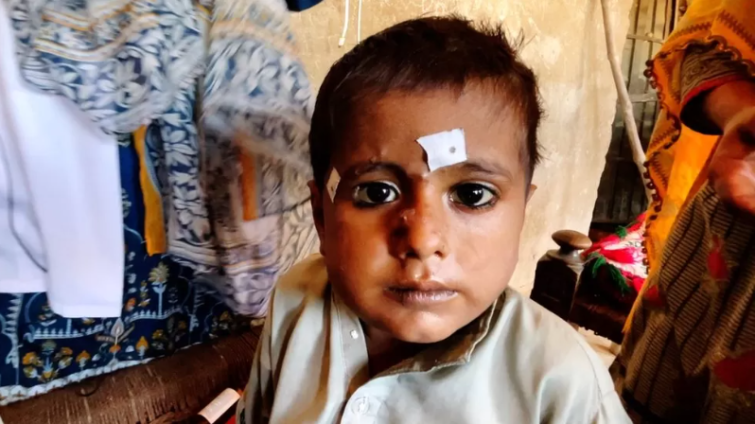 More than 2,000 hospitals and health centres were damaged or destroyed in recent floods in Pakistan – and families and their children are battling malnutrition and infection in what’s now a public health emergency.

Doctors like Ammara Gohar are on the front lines of the crisis as the UN launches a fresh appeal for the world to send more aid.

“It’s very difficult for us. We attended to patients during Covid, but this is tougher because it involves environmental hazards,” says Dr Ammara, a gynaecologist four years into her medical career.

She is working out of a school in rural Sindh province, the area worst affected in the floods, which has temporarily become the headquarters for the district health office after it was submerged.

Here, Dr Ammara and her team load a van with boxes of medical supplies – everything from bandages to malaria tablets, hepatitis test kits to oral rehydration salts.

“We’re taking this to people who’ve been completely cut off since the floods,” she explains.

With around 75% of districts in Sindh province still flooded – and many roads underwater – the only way people in isolated communities can access medical help is if it travels to them.

So after an hour’s drive, we reach the banks of a huge lake which a few months ago was fertile land that fed people in this area. Having swallowed their crops, it’s now stagnant water where mosquitoes multiply, and a breeding ground for disease.

Across the vast expanse live villagers who’ve been stranded for weeks.

“These people cannot survive without support in disaster-hit areas,” Dr Ammara tells us.

Her team of government doctors take to wooden boats to reach them, their efforts supported by the United Nations Children’s Fund (Unicef).

“This is a medical crisis,” Unicef’s Aadarsh Laghari tells us, as the medical team paddle to a village needing help. “Access is one of the biggest problems – every day the medical needs of these communities are rising.”

In the first three weeks of September alone, more than 140,000 cases of malaria were reported in Sindh, health officials say. But with many people in far-flung areas unable to get tested, it’s likely the true scale is much higher.

And that’s why mobile medical units are so urgently needed.

After we reach the shore, the team set up a health camp under the shade of a tree on the edge of the village, where cows had earlier been taking shelter from the sun.

A banner is hung from the branches to advertise the clinic; supplies which had been carried here by land and by water, are now being unpacked and laid out on plastic tables.

As a tannoy announces the arrival of the medical staff, a steady stream of villagers arrive, many of them women carrying young children. The village of Noor Shah was already impoverished but the floods have pushed people right to the edge.

As patients line up, a nurse measures the arm of baby Saima, with Dr Ammara looking on. The tape wound around her tiny arm moves to the red area of the scale, indicating that Saima is perilously thin.

“There are so many people like this baby,” Dr Ammara says. “At just nine months old she’s severely malnourished.”

Many families are sleeping in the open in flimsy tents next to homes which were washed away, or have crumbled to rock.

Marooned for weeks, they’re finally getting much needed medical help – but many say they’re still waiting to get food and access to clean water to drink and wash with.

At another village close by, three-year-old Gulbahar is examined by Dr Ammara. He has scabs on his face and body and is weak – the result, Dr Ammara says, of drinking and washing with contaminated water.

The UN says a lack of toilets has left people with no choice but to defecate in the same water, leading to outbreaks of illnesses.

“Because of the floods we are seeing so many young children with these skin infections,” Dr Ammara says, opening Gulbahar’s mouth to examine his diseased gums.

She hands his mother some medicines, but concedes her supplies will soon run out.

While diseases spike, Pakistan’s already overwhelmed healthcare system lacks the resources to help all those who need treatment. Boats are also in short supply, as are doctors – meaning efforts like this remain limited.

Many people we met in these remote communities blame the government for not doing enough.

Dr Azra Afzal Pechuho, the Sindh health minister, said: “It’s like fighting a war which has no end to it. Until the water recedes, which is going to take another two, three months, we will still be seeing a lot of health issues.”

She has called for doctors to volunteer extra hours.

“Ten days, three days, four days – whatever they feel they can give to the flood-affected areas,” she told the BBC.

Dr Ammara and her team are already working around the clock.

Without the camps, Dr Ammara fears people won’t be able to survive.

“It hurts, it really hurts, I can’t see people like this,” she says. “I feel bad that we can’t do more.”

DISCLAIMER: The Views, Comments, Opinions, Contributions and Statements made by Readers and Contributors on this platform do not necessarily represent the views or policy of Multimedia Group Limited.
Tags:
Flooding
Pakistan