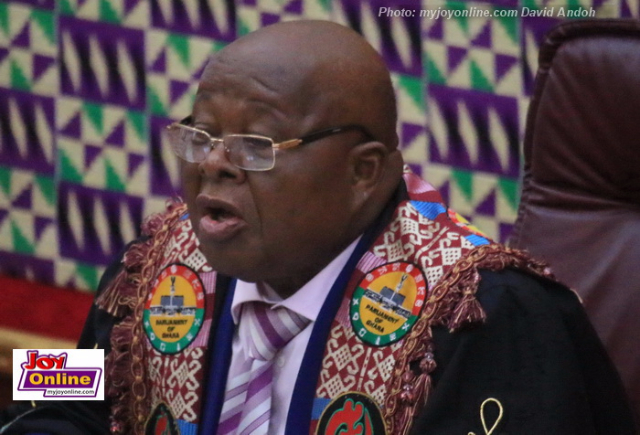 A principal lead with Odekro, a research company focused on Parliament, says punitive measures are needed to curb the phenomenon of absenteeism among MPs.

Ernest Nii Ashitey Armah said, they are curious that MPs whom the constituents have vested power and spent resources on, do as they wish when they have to ensure the right things are done.

“If I were to be in the shoes of the Speaker, I would have cracked the whip by now,” he told Evans Mensah Thursday.

His comment follows the caution by Speaker of Parliament, Prof Mike Ocquaye to MPs once again, to take the sitting of the House seriously.

This was after the House registered low numbers on the floor when sitting started around 10:15 am Thursday.

Related: Samson’s Take: Let’s get these MPs out!

When sitting commenced only about 15 MPs were present necessitating Prof. Ocquaye telling MPs the need to prioritise sitting at the plenary over anything else.

Although there were supposed to be Committee meetings which could have taken MPs away from the House, none of those meetings was in session as at 10 am when sitting started.

The Mines and Energy Committee was supposed to be meeting at 1 pm to deliberate on the performance of NEDCO.

Also, the Employment and Social Welfare Committee was supposed to also be meeting at 11.30 am as well as the Special Budget Committee which was scheduled to meet officers of the Electoral Commission at 4 pm.

According to Parliament’s Standing Orders, the Speaker can sanction an MP for missing 14 days sittings continuously without any permission from the Speaker.

But the Odekro researcher said Thursday’s attendance was not the worse because, in October 2017, the Speaker met only four MPs at the beginning of the day’s session.

“It is something that has been happening regularly and we think it is because they are never sanctioned so far as people can get away with it.”

Per the rules of the House, MPs have to sign Parliament’s Leave of Absence form explaining why they cannot make it to the House which has to be approved by their leaders before the Speaker gives final approval.

This, according to Mr Ashitey Armah, this is not adhered to leading to increased absenteeism.

On his part, Vice Chairman of Parliament’s Constitutional and Legal Affairs Committee, Alexander Abban, says the absenteeism is because a lot of MPs have divided attention.

“It has been a perennial problem and we may have to look at the process and people that we take to parliament. It appears to me in Ghana we don’t have career politicians so called.

“We seem to have businessmen who get to a certain point and see coming to Parliament as the way to self-actualisation and not necessarily do the work. So, we must even look at the grooming process,” he said.

Mr Abban believes people with money should just not be allowed to be in the House without contributing to the lawmaking process, their core mandate as legislators.