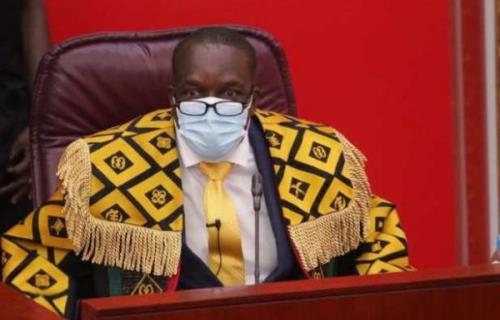 Parliament will conduct an open ballot to determine the decision of each of the 275 members of the House on the bill on the “Promotion of Proper Human Sexual Rights and Ghanaian Family Values, 2021”.

An open ballot system is a voting method in which voters vote openly, in contrast to a secret ballot, where a voter’s choices are confidential.

Proponents of the system point to the fact that it means the ballot box cannot be tampered with in the way an anonymous election can.

On the other hand, by foregoing the secrecy of the ballot, voters may be intimidated into voting a certain way which might be different from how they would actually vote if allowed to do so anonymously.

“The decision of the House will be made public. We will want to know where each Member of Parliament stands,” Mr Alban Sumana Kingsford Bagbin announced, as he welcomed members of the Legislature back from recess to begin a two-month meeting prior to Christmas.

The Promotion of Proper Human Sexual Rights and Ghanaian Family Values, 2021 Bill, nicknamed Anti-Gay Bill, and now with the Constitutional, Parliamentary and Legal Affairs Committee of Parliament, is a Private Members’ Bill championed by eight legislators, seeking to outlaw the Lesbian, Gay, Bisexual, Transgender and Queer (LGBTQ) and adjacent activities, and stipulating jail terms for offenders, sympathisers and funders.

The bill, introduced to the House in July 2021, underwent its first reading on 3rd August 2021 and has since been transmitted to Parliament’s Constitutional, Legal and Parliamentary Affairs Committee with subsequent readings with the resumption of the House from recess.

Since its introduction to Parliament, the Anti-Gay Bill has generated a lot of interest with different dimensions as it awaited consideration by the House.

Speaker Bagbin cautioned that the House would not allow any filibustering of the Bill, but would create an enabling environment for all to put across their views.

He agreed with Majority Leader Osei Kyei-Mensah Bonsu for committee sittings on the proposed law to be held public.

Speaker Bagbin assured Ghanaians that the Parliament would pass a law that protects the Ghanaian culture and values as a people which would also ensure the identity of Ghanaians.

“I persuade that this Parliament will pass a law that is in sync with our constitutional provisions, particularly the provisions on fundamental human rights and freedoms, and the various laws that exist in this country.

“I am persuaded that we will pass a law that is rich in common sense, human decency, morality fact, logic, and the one that does not foment hatred in any shape or form, “the Speaker insisted.

He emphasized the need for the House with other Arms of Government, civil society, and the media, and entreated members to get on board and to purge Parliament of the perception of being subservient to the Executive.

Speaker, who is also the Vice President of the Commonwealth Parliamentary Association International, commended Majority Leader Osei Kyei-Mensah-Bonsu on his election to the association’s vice chairmanship position and announced that Ghana would host the 2023 international conference.

Speaker Bagbin urged all MPs to give maximum support to the Chair and Leadership to speed up their activities and also pleaded with the various Ministers to respond to calls from the House and respect the timetable of the House while urging them to take keen interests in the preparation of their Ministries’ Budgets.

He noted that the Regions of Ghana Bill, 2021, and the Standing Orders Bill, 2021 were two important Bills to attract the attention of the House and charged the MPs to work hard to enable the House to pass all outstanding bills if they regularly and punctually attended parliamentary sittings.

DISCLAIMER: The Views, Comments, Opinions, Contributions and Statements made by Readers and Contributors on this platform do not necessarily represent the views or policy of Multimedia Group Limited.
Tags:
Alban Bagbin
Anti-LGBTQI + Bill
Osei Kyei Mensah Bonsu
Parliament of Ghana