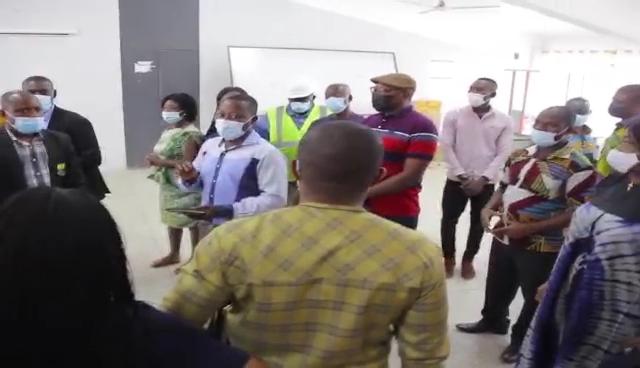 The Parliamentary Select Committee on Education has lauded government’s effort in procuring equipment for the various Technical Universities to train students.

According to the Select committee, the evidence on the ground in the pursuit of better Technical and Vocational Education by government is encouraging and should be supported to augment the industrialization drive of the country.

Speaking after a tour of some technical universities, Chairman of the Parliamentary Select Committee, Kwabena Amankwa Asiamah, intimated that government ought to be commended hugely for the interventions in the Technical and Vocational Institutions across the country.

He said the Committee’s happiness stems from the fact that there has been an unprecedented infrastructural support, machinery and equipment installations that have been done on the various campuses of the technical universities.

The chairman said, for government to procure such large number of equipment, some pat on the back is in order.

“This is what we want to see. We want to reduce the unemployment rate within the youth. The teeming youth don’t have jobs because of the concentration on grammar schools.”

At the Cape Coast Technical University, the third institution visited, Mr. Amankwa Asiamah was convinced that now that the country has realized the fact that there should be massive investments in the TVET sector, there should be a conscious effort to make the youth become more innovative and creative so that they could acquire the needed skills from the TVET sector, employ themselves and employ others to totally reduce the unemployment rate.

He specifically asked parents to consider sending their wards to the Technical Universities to learn skills to boost Ghana’s industrialization drive.

“We want parents to depart from the grammar schools and embrace technical and vocational education because it holds the key to the future development of the country.”

“I think that the decision to convert the polytechnics into Technical Universities initiated by the previous NDC government led by John Dramani Mahama is certainly paying dividends. I am happy because the current government also continued and that’s what we expect in the national interest,” he stated.

Deputy Minister of Education, in charge of TVET, Gifty Twum Ampofo, explained that government was retooling the entire educational sector making TVET a central pillar starting from the basic schools.

The technical institutes at the second cycle level, she said, were having a face-lift and the whole of TVET is being touched by improving infrastructure, building workshops and laboratory for them and retooling the workshops with state-of-the-art equipment.

Director General for Commission of TVET, Dr. Fred Kyei Asamoah Asiamah, talked about the revolution that was currently happening in the TVET sector.

“It is also an appeal that our technical universities and technical institutes are equipped to give them all the skills they need to be able to be successful. You go to the Cape Coast Technical Institute and you realize that they have similar equipment.”

Vice Chancellor of the Cape Coast Technical University, Prof. Joshua Danso Owusu Sekyere was upbeat if government could continue with the progress in the sector and provide more, the Technical Universities would be a great catalyst for the growth of industries in the country.